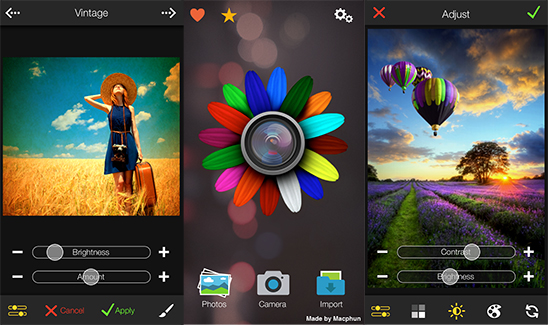 FX Photo Studio lets you shoot directly from the app or bring in images from the camera roll. You can first apply basic edits such as adjusting the crop, brightness, color temperature, exposure, hue, saturation and more.

The app’s big draw, however is its newly augmented roster of special effects, which you can apply individually or mix up into unique looks. Those combinations can be saved as presets and then used on other photos. A limited number of text effects are also available.

The app’s updated collection of effects — featuring 14 categories and 194 filters, include styles like lomo, vintage, black & white, color lens filters, vignettes and blur as well as frames, textures and overlays. Cartoon and comic effects and pencil sketches can transform a mundane photo into something worth looking at.

The new version’s redesigned interface freshens the look and feel of the app. FX Photo Studio was already quite streamlined, but the app has been updated and the icons simplified for a more modern look and easier arrow navigation. With your image in place you can swipe through each effect in a category to try it out. The masking feature lets you paint on effects to discrete areas of the image.

A new smart algorithm for the Random tool lets the app automatically choose the filters that will look best with your images, though I hardly ever agreed with its choices.

Macphun says the app is faster, too, and though I never experienced delays using it on my iPhone 5, version 6 performance is responsive.

The update is available for the iPhone app only. The iPad app has not been updated. It’s regularly $2.99 on the App Store with in-app purchases of additional filter packs available. An introductory price of 99 cents is in effect until Monday, August 11.