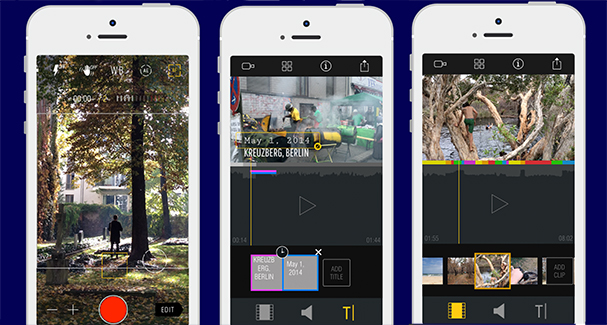 Like many apps that at first appear to revisit the functionality of others in the same genre — which is especially true in the photo/video category — the new Kinomatic video app for iPhone was created to solve a problem that the developers encountered when trying to shoot their own stuff for friends and family.

The resources they found — from the built-in iPhone camera to some of the App Store’s high-end video shooting and sharing apps — were either not enough or too much.

It’s a common problem, which underscores that different situations demand different kinds of features, and most shooters need more than one video app. For example, Videohance, a shooting and editing app, emphasizes stylized filters and special effects while Global Delight’s Camera Plus offers unique features for editors who like to get out in front of the camera. And then there are high-resolution shooting apps like UltraKam.

With Kinomatic, the developers sought to tell a story with a single clip that’s more than a few seconds long and to shoot high-quality video with a minimum of manual controls. The app appeals to shooters who are interested in splicing footage together, but also to enthusiasts who need something both flexible and easy to use. 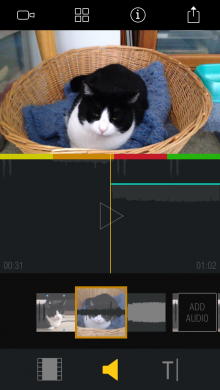 That’s in addition to niceties like adding and trimming music, adjusting audio volume, and adding titles in various colors and typefaces.

Trims are non-destructive, so that even if you cut out parts of a video to combine into existing footage, the original shoot stays intact in your camera roll.

The app does not impose a clip limit or a time limit on movies, but under 20 clips and a half hour is optimal, the developer says, without running into space and memory problems on the device. 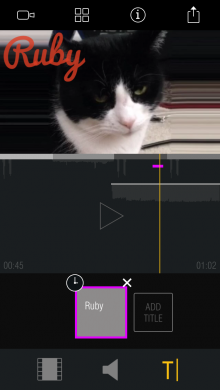 The nice part about Kinomatic is that it automatically mixes your most recent clips together and lets you add previous clips too.

However, if you just open the app, you can start bringing clips in from anywhere in your camera roll.

The combination of audio and title capabilities lets you add a measure of sophistication to the video. The only thing missing for me is some simple transitions that would be nice if you were trying to combine shots taken at different times.

A sharing feature to Facebook and Vimeo as well as email tops off the feature set.

Kinomatic requires iOS 7 and is optimized for the iPhone 5. The price is $3.99, but it is currently available for the special launch price of $1.99.