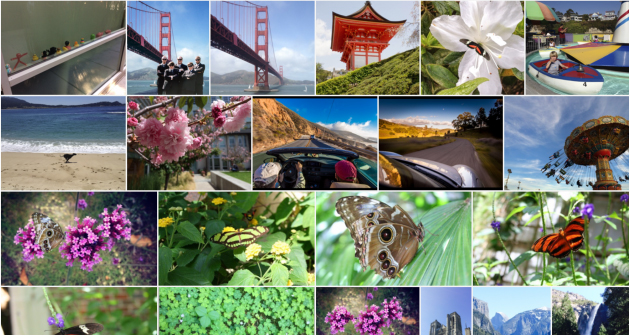 Here’s the idea: Because even the newest and most advanced iPads have limited horsepower, on-the-go artists have to wait until they can get back to their laptop or desktop Photoshop app to perform complex imaging acrobatics.

The new Adobe Photoshop Mix, a cloud-based image editor and compositor that debuted as part of Creative Cloud 2014, will actually perform some processor-intensive functions — like content aware fill, lens correction and shake reduction — in the cloud and deliver the results to your iPad.

With Mix, not only can you open native Photoshop PSD files, but you can even choose to open a single layer of a PSD file for editing on your Apple tablet. Of course, the app can also access all the photos in the device’s Camera Roll, and let you use its in-app photo shooting feature to capture new images.

Select the subject with your finger to separate the foreground from the background. Mix does a good job with its Photoshop-like smart select and refine edge features.

Adobe has other high-level mobile imaging apps — notably Photoshop Touch — which lets you do some mighty complex tasks with an iPad or iPhone and your fingertips. The difference between the two is not only what they can do, but where and how.

Mix is much easier to use than Photoshop Touch, and it’s free, compared to the $9.99 price tag for the iPad app. But that’s only fair because with this debut version, Mix offers a limited number of high-caliber options compared to Photoshop Touch, though it performs these feats without taxing your iPad’s processor.

Drop in a second background image for an easy, sophisticated-looking composite. This is the closest Lisa will ever get to the great outdoors.

In addition to this cloud-based madness, Mix also offers an assortment of down-to-earth image editing functions that most photo enthusiasts will recognize from consumer editing apps such as Aviary or Camera+. You can use Photoshop Mix to adjust exposure, contrast, saturation and clarity with handy sliders and real-time previews. You can apply looks — filters in Instagram parlance — or extract parts of photos to combine two different photos together in a composite.

In addition to local files, Mix lets you access images from your Creative Cloud account, Lightroom Mobile library and Facebook account. When you’re done with your picture, or get to a point where you can stop working, you can export even layered and masked images back to Photoshop on the computer or publish your work to the Adobe-owned Behance community for help or comment. (Note that Behance is only available to Creative Cloud subscribers, while Mix is available to anyone.)

The Mix interface is similar to Adobe’s recent iPad apps, including Photoshop Touch and the new Adobe Sketch and Adobe Line: Horizontal orientation, with left-side vertical navigation lets you pull the photos you want to work with into the canvas.

The Cut Out Photos feature is reminiscent of the quick select in Photoshop — you use your finger or a tablet stylus to select parts of an image, just as you would with a mouse or pen tablet on the desktop. If you want to combine parts of one image into a second photo, this technique combines them via guided steps in the interface

Add looks separately to each image, or paint the effects on the specific area you want.

As in the past, Adobe has employed gestures to scale, move, transform, resize and change the arrangement of image elements. Swipe two fingers to the right to undo and back to the left to redo, though sometimes this gesture winds up moving the whole photo.

Its ease of use is a real advantage for many reasons, not the least of which is now that Adobe has made its $9.99-a-month Photography Program a permanent offering of Creative Cloud, it will likely attract more of the enthusiast crowd to the subscription program that includes Photoshop CC and all the Lightroom apps.

The content aware fill feature worked quite well in various images, and very much like it works on the desktop. The upright function also performed respectably, and as expected. Less of a success was the Shake Reduction feature. On several shaky images I tried, the effect mostly resembled sharpening which, though adjustable via the slider, also left artifacts. I thought the local Clarity control in the enhance module actually did a better job on at least one image I tried. While the result was still a little soft, at least there were no accompanying artifacts.

One snag I see with Mix is bandwidth. It took on average two minutes and 15 seconds each to do a lens correction and a shake reduction operation, start to finish, on iPhone images. It took two minutes and 13 seconds for a three-layer, 24MB PSD file to load into the Mix interface from Creative Cloud and more than five minutes for a 67MB multiple-layer PSD file to load for example, on my Wi-Fi network. If your home network isn’t fast, Mix’s cloud activities might be a problem.

The cloud-based content aware fill made one side of the sky look cloudless.

As a 1.0 product, Adobe Photoshop Mix makes a respectable debut out of the gate. But to live up to the Photoshop title, I expect that future versions will have even more capabilities.

Photoshop Mix is a significant achievement for Adobe. It’s one of the first mobile apps developed with Adobe’s new Creative SDK, a software library that the company is now beta testing with an eye toward  distributing it free of charge to third-party developers.

The shake reduction feature gives four choices, but all seemed too oversharpened. Toning down the last choice was the best option in this case.

Unlike Photoshop Touch, Adobe has shown with Mix that complex photo manipulations do not have to be difficult to accomplish. It operates step-by-step with formulas that give you outcome choices. Its round-trip, non-destructive editing features are convenient and forgiving.

Connectivity may prove the most profound barrier to some users, however. While Adobe generally states that Wi-Fi connectivity will yield better performance than cellular, even with Wi-Fi, mileage will vary for cloud functions. Nonetheless, there are an abundance of elegant local options that you can save to your camera roll that do not require a fast connection.

The Upright feature did a nice job with the telephone pole. Just crop and you’re good to go.

It’s unclear at this point how long the cloud-based features, which are described in the app as premium offerings, will be free to use, and Adobe will not comment on that.

You have nothing to lose in checking out Mix on your iPad right now. Not only is it free, but even with an Adobe ID login, you still can opt for the free subscription, which gives you 2GB of server space to save your work.

Read next: Dropcam acquired by Google's Nest and will be folded into the Nest brand