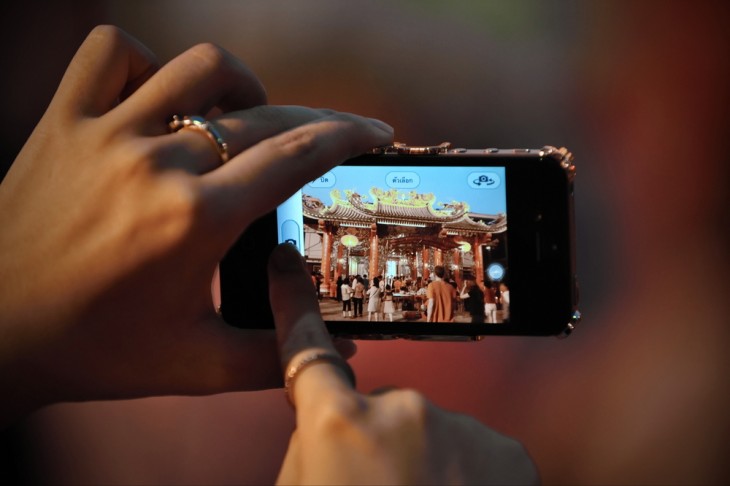 Shooting video is a challenge because its very flexibility is often a liability: cinematic freedom comes at a time consuming, complex price. Inevitably you shoot too much, like too little, and consume hours attempting to salvage bad footage. Sometimes you wish you could just start all over again.

That’s at least part of the concept behind reShoot, a free iOS video shooting, editing, and sharing app just released from Wally World Media. reShoot is designed to help mobile videographers of all skill levels get the most out of what they shot, and offer more opportunities to fix mistakes and insert footage on the fly.

Wally World Media shared with The Next Web a preview the upcoming 1.6 version of reShoot, which will be updated on the App Store shortly. Helpful new features include the ability to fast forward and reverse during preview and move the scrubber over the timeline with your finger, undo a cut, and additional interface tweaks.

A universal app that works both on the iPhone and the iPad, reShoot facilitates the capture of variable length movies (as opposed to some consumer apps that place strict limits on clip duration). The app’s video editing technology lets you pause, rewind, and reshoot portions of your movie. The app’s signature videoArc technology lets you automatically add and stitch together multiple video clips, captured at different times, into a single movie. That helps you avoid the confusion of working with scattered individual short clips.

You can pause recordings and return to them later. You can also preview videos while you shoot, record new footage into existing videos, or insert clips from different videos directly from your the camera roll.

I found shooting with the app quite easy and intuitive. The interface has a number of options, but since it is in landscape orientation by default, it didn’t look cluttered. Any control that might be confusing was labeled with text, however the developers rightly assume that you understand the point of a clippers icon. In short, the layout of the screen made sense to a first-time user without having to consult the manual.

reShoot supplies all the typical controls, including focus and focus lock, a smooth zoom function, excellent exposure and white balance for changing conditions, and fine audio pickup. In all, the video I shot was clear and watchable in its raw form. The pause function proved convenient as I filmed around my neighborhood. I never had to quit out of the app; I could just stop filming, do something else, and then start again when I was ready with all clips assembled in the same file where I left them.

You can easily toggle back and forth between shooting and preview mode. To reshoot, you have to start at the end of the footage and slide the reshoot timer to the appropriate spot in order to replace something you don’t like. You can view your entire movie to decide what to reshoot or view just the final few seconds. Whatever is covered by the red marker will be replaced with new footage. If you want to cut other places, use the Clippers tool.

The app is intelligent enough to know the orientation at which you recorded and which side was up as you try to mix disparate clips into your movie, so as you import clips, you’re given the option to rotate them to match the orientation of the existing movie.

If you’re going to do surgical cuts to your movie, be prepared to wait, though, as each cut and insertion took awhile, sometimes nearly a minute, to execute on my iPhone 5.

Pros: Flexible movie making without time constraints; lets you insert multiple clips into a movie; lets you add clips to existing movies; allows for a redo of clips; easy to use and learn.

Cons: Slow to save, insert, and make cuts.