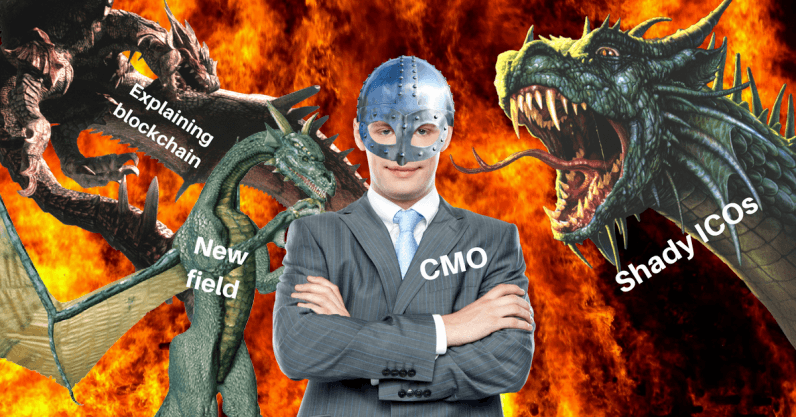 Being a Chief Marketing Officer of a blockchain startup is exciting, but it’s also nerve-wracking and quite honestly the most challenging work I’ve done in my twenty-year career. This is because, despite the promise that it holds, there’s a lot of confusion around blockchain and the ways it can be the most disruptive technology since the birth of the internet.

Having the opportunity to work for established companies like Dow Jones and Salomon Smith Barney, I know firsthand how traditional companies tend to operate. Running my own independent research/strategic communications company serving Fortune 500 companies for thirteen years, I became accustomed to wearing multiple hats. Like putting out fires when needed, keeping things running smoothly, and planning ahead to do well, even prosper in down economies.

With that said, I wanted to share some of my own experiences with you in the hopes those either in the space or perhaps contemplating becoming a CMO for a blockchain company can learn from some of my observations over the past six months.

The uniqueness of the blockchain world

Before I go any further, let me make something perfectly clear, the role of a blockchain CMO is unquestionably NOT just about marketing. It’s a hodgepodge of marketing, communications, business development, strategy, sales, relationship management, event planner, and being somewhat of a SME. That’s what makes it such an intoxicating role. Every day is very different for me. I love that.

So now that I’ve set the stage for this discussion, here’s why being a blockchain CMO or as I like to say Chief “Make-it Happen” Officer differs from any other industry. In previous positions, I would deal with currencies, commodities, and equities — hard assets more traditionally used globally as an exchange of value or economic benchmark. This is a stark contrast to cryptocurrencies or cryptos since they are not a widely accepted form of payment (at least not yet).

Additionally, some may argue whether or not cryptos are actually an asset or a currency at all — a whole other conversation altogether (just ask the CFTC). Therefore talking about blockchain as a platform that all cryptos are built upon, a technological breakthrough used to store digital records, a secure pathway to exchange digital assets and execute smart contracts, is hard stuff for so many people to wrap their heads around.

So you can imagine how difficult it is for CMO’s to frame blockchain in a way that’s easily understood by the masses, especially when fintech — a dominant use case for blockchain, at least in the eyes of the public — is really only a fraction of the technology’s potential application. Therefore CMO’s have a lot to do to help bridge the present knowledge gap around blockchain and help overcome the negative stigma around it, especially since according to Deloitte nearly 40 percent of execs know little or nothing about blockchain.

This is where good storytelling comes in.

Telling the story of blockchain

Unfortunately, there are still many scammers in the space, which means a there are a lot of fraudulent stories out there. Some companies are hiding behind a white-paper with no real product intentions. This gives the blockchain industry a bad rap, especially when some are even using actor Ryan Gosling’s likeness in their Advisory Board materials (oh yes, that’s a thing).

Then there’s history that has cast a large shadow on blockchain. For example dark markets (Silk Road) and crypto heists (Mt. Gox, Coincheck) force me to help targeted clients and potential partners see the real value blockchain is helping to create. This requires me to spend a great deal of time speaking about the benefits of blockchain, and the opportunities still to come. In many instances, I don’t get into highlighting our own solutions as much as I’d like to because I’m spending a lot of my time defending the entire field.

This is why creating thought leadership and credibility for your company is paramount for today’s blockchain CMO. Fortunately, I’ve had success in this area by writing content published by the likes of Forbes, Inc. and VentureBeat. If you are just starting out, one way to help your own company gain some positive exposure, exposure that may help open some doors to journalists, conference planners, and media outlets, is to create a Medium channel where you can write posts about the industry.

You can also leverage LinkedIn by responding to posts when applicable and reaching out to influencers (again, not by being promotional). You may consider adding your blogs (wherever they are posted) to Steemit and Reddit. Also, try submitting your work to tech specific outlets such as WIRED, HackerNoon, TNW, etc. I’ve found articles under 1,000 words tend to be more favorably received by third-parties.

Another way to build thought leadership is to have a member of your team speak on industry panels or at the University level. There are tons of schools looking to have professionals in the space come lecture to their students, so don’t miss out on that chance.

A major issue for any CMO in the blockchain space is the lack of real case studies. This needs to change and CMO’s in the space should be helping to lead the charge on this.

To me, the blockchain industry MUST move beyond white-papers so prospective B2B clients can validate proposed solutions. For example, I recently had conversation with a prospective partner who asked “This sounds great. Has anyone been able to kick the tires on this yet?” Getting past that question would be a blessing not just for my own company, but the blockchain community at large. It would be a welcome turn of events that CMO’s in the space can leverage to help spur future alliances and partnership conversations.

The fact the blockchain space is changing so rapidly is the reason CMO’s in the space need to stay abreast of new and emerging industry dynamics — dynamics which include constant government regulatory chatter, ever changing compliance mandates, new fork updates, project advancements, etc.

Never forget the customer and stay up to date

As a blockchain CMO I can’t emphasize enough that you must know your potential customer pain points, understand what a customer buyer’s journey looks like, and make sure you read, read, read. By this I mean anything from combing social media to reading various white papers and tech journals.

That being said, even then, there’s simply so much happening on a daily basis that its really hard to keep up with everything 24/7 since blockchain as an industry is still relatively young and we are literally witnessing many new systems being created right before our eyes, in real-time. Here’s a recent Twitter exchange from Laura Shin, a leading blockchain journalist, which touches on that very point.

Was just talking about this w someone yesterday! They said, “I can’t keep up. I worry someone might ask me something I don’t know about and I’ll be exposed.” I was like, NO ONE can keep up! If you don’t know about that topic, just say, I can’t speak to that issue but can say …” https://t.co/zyNqh8Qvb8

One way I’ve found it enormously valuable in my day-to-day has been learning as much as possible about the inner workings of blockchain as a service. I do this by carving out time each day to speak with our developers and Chief Technology Officer (CTO). I’ve come to realize that time with my CTO has been invaluable, especially when I digest those conversations and later speak with journalists, analysts, prospective conference leaders, partners, etc.

Try and have your company stay active on social media (think Twitter and LinkedIn, not Instagram or Snapchat). Believe me, it’s tedious to maintain social media channels but that’s where some good conversations are actually taking place. Also, consider creating a company community channel. We originally created a rocket chat channel but users found the U/X a bit too rigid to navigate so we recently migrated to Telegram, a platform that is gaining more traction for us and is pretty easy to use.

There isn’t a blueprint for being a blockchain CMO, but some folks doing some really good work in the space are Jay Smith (Factom), Brian D. Evans (ShipChain), Tracy Leparulo (Polymath), Aaron Lasher (Bread), and Stacy Huggins (MadHive).

If you take anything away from this piece, and I really hope you do — help develop case study opportunities for your company, spend as much time with your CTO as possible, publish often, and educate, don’t sell. There will be plenty of time to discuss your business — right now, CMO’s need to forge new relationships and help take down the veil of uncertainty when it comes to blockchain wherever possible.

Seeing the results of people having that “aha moment” has been enormously gratifying for me and my company. Hopefully you have the same feeling too. Make it happen, our amazing young industry will be better off if you did.