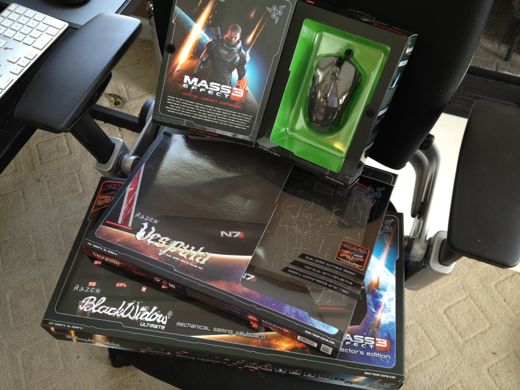 If you’re a PC gamer, chances are that you’ve used some Razer peripherals by now. The company, which has been in business since 1998, had hit a rough road over the past few years, based on tracking issues with its mice, but it appears to be on the mend. A new line of peripherals, launched in conjunction with the release of Mass Effect 3, is certainly no exception to the healing process, and I’d recommend them without hesitation.

Razer sent over its Vespula dual-sided mouse pad, BlackWidow Ultimate mechanical keyboard and its super-slick Imperator gaming mouse. I’ve had the three pieces for a few days, so it’s time to put down some words about them. We’ll start with the mouse.

I fully expected to be impressed, because I’ve been using Razer peripherals since the original Boomslang 2000 mouse was released in 1999. The tracking problems that I’ve experienced with some of the mice in the past simply don’t exist in the Imperator that I’m using. In fact, it’s probably the most accurate and comfortable gaming mouse I’ve worked with, and a couple of key features work to make that happen.

First off, looking from the side, you’ll see that the shoulder buttons are set into a track. This track is handy, because it allows the buttons to be moved fore and aft by a slide control on the bottom of the mouse:

The top buttons, behind the wheel, allow for on-the-fly adjustment of the mouse’s sensitivity, and they require enough force that you shouldn’t find yourself bumping them accidentally. Now, combine that with a velvety top surface and what you have is a mouse that’s great for all-day comfort, while still having the features necessary to pwn some nubs when the time is right.

The Imperator isn’t cheap, at $80 MSRP. But it’s also not far off from similar offerings by other makers. SteelSeries’ Diablo III mouse, for instance, is only $10 less, but both companies have mice that can push the $100 mark. Some gamers will appreciate the Imperator’s lit scroll wheel, and it wasn’t so invasive as to annoy me. All of the buttons have a good, solid feel to them, and the mouse is near the middle of the weight range that you’ll find for sale across the market.

Of the three pieces I was sent, I’m most jealous that I couldn’t really utilize the Vespula for too long. The keyboard shelf on my desk is simply not wide enough to accomodate this beast of a mousing surface. At 12.5 inches wide by 9.5 inches deep (31.75 x 24.13 cm), it’s not the biggest mouse pad that I’ve seen, but it’s definitely high up on the scale.

If you have the room to use it, however, I would highly suggest that you do. The $35 price tag won’t break the bank.

The Vespula is actually made up of 2 parts; a rubberized surface, with a wrist rest, to keep the mousepad in place, then the hard-plastic mousepad itself. One side of the pad has very little texture, and is almost shiny. The other side adds a bit of texture, but not enough to slow you down. Here’s a quick side-by-side for comparison:

My wife, who is also a considerably heavier gamer than me, has been using the Vespula since the day it arrived. I tested it for quite a few hours, but she’s addicted to it. On top of being a supremely nice mousing surface, she says that the memory foam wrist wrest is helping her to hold better posture and it’s actually making a nagging case of TMJD easier to deal with. That’s a pretty solid recommendation for a $35 accessory.

Let’s talk keyboards, and my wild, undying passion for finding the best ones. First thing’s first – if you’re a fan of mechanical keyboards, there isn’t a better choice on the market than the offerings from Das Keyboard. But the company doesn’t do gaming, and that’s what we’re talking about here. That being the case, the BlackWidow Ultimate could quite easily become my favorite gaming keyboard to date.

Like the mouse, the BWU is backlit, but it has 5 levels of intensity. I’ve found that even level 1 is visible in my rather-bright home office, and level 5 is almost to the “over the top” point. Beyond the lighting, though, there are some genuinely fantastic features to the BWU.

First off, you can deactivate the Windows key, which is just freaking handy. But you’ll notice a row of macro keys on the left. There’s no massive software needed for these. Just make sure that the drivers are installed and then you can do on-the-fly macro recording so they can change as easily and as quickly as your needs do during a game. Oh, and you can program up to 10 profiles in the software, so that you don’t have to reset macros just because you switched games.

An audio out/mic in set of jacks on the side is handy, as is the USB passthrough. Even when hooked to the low-power USB ports on my MacBook Pro, the BWU managed to send enough power to let me hook up the Imperator gaming mouse. On a Windows machine, a lack of USB power should never be a concern.

The BWU is a heavy beast, weighing in at 3.3 pounds (1.5 KG), but that seems to help keep it in place during furious key mashing. A slightly-rubbery, slightly-velvety feel to the keys tends to let you ignore the fact that your hands are sweating and helps to keep your key aim true.

At $140, the BlackWidow Ultimate ME3 is far from a bargin-shopper’s dream. But it’s not really meant to be. Razer has put a lot of effort into making a truly great gaming keyboard, and you’re going to pay a premium for that. If it’s a bit too rich for your blood, consider the Arctosa from the company, which comes to you for just $50. 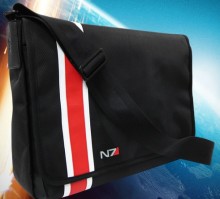 Razer is looking to cash in heavily on the ME3 storm. The company has the pieces I reviewed here, but has also done an iPhone case, a messenger bag, an ME3 version of its Onza Xbox 360 controller and the Chimaera wireless, 5.1 surround sound headset. Ultimately it’s up to you to decide if you want to spend the cash to show your ME3 fandom, but the graphics are tastefully done across the entire line, and would make good additions regardless of your love of the game.

Read next: Plyfe gives online advertising a playful twist, aiming to be a win-win for consumers and brands