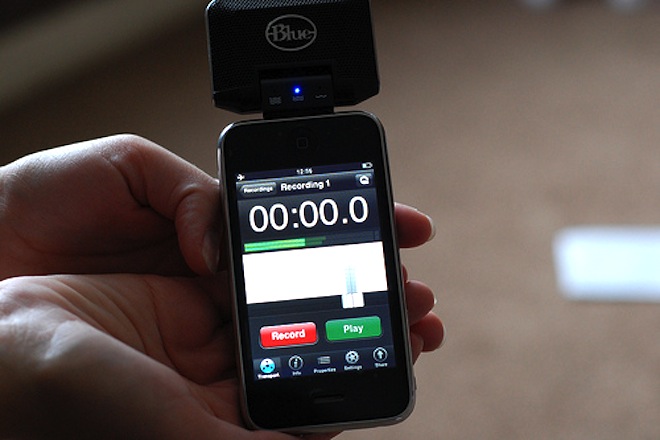 If you’ve ever been sitting in a lecture, wanted to record your surroundings or just had an itch to bust out some lyrics while you’re in the car, you’ve likely run into the fact that recording options for mobile devices usually suck. A lot. If you’ve not run into those urges, the Blue Mikey 2G might just make you find reasons to record things.

The Mikey 2G is, obviously, the second generation of the Mikey from Blue Microphones. The first generation, while good, simply wasn’t great. With the 2G, Blue has added a pass-through USB charging port, an external input, it has given a considerably larger range of motion to the tilt of the mic and the attenuation switch has been changed. What you end up with is one seriously great portable recording solution for your iOS device.

Now, let’s get the devices thing out of the way early. The Mikey won’t work with your iPhone 4, or with the latest generation of the iPod Touch. I’ve also found that it’s not supported by the iPad. The lack of iPad support is unfortunate, as we see more iPads starting to show up at conferences and speaking events, where using the Mikey would come in very handy. Assuming that you do have an iOS device that can run the Mikey 2G, you’re sure to be well impressed. It should work with any audio recording application that you can get, but Blue has a free version of its Blue Fire software that works quite well. It’s not the most intuitive app that we’ve seen, but Blue is a microphone company, not an applications developer. What’s really handy about it, though, is the fact that you can set up the Blue Fire app to use FTP to send off any recording directly to a server.

Sound quality on the Mikey is better than it should ever be, given the $80 price point. Across the spectrum, the sound is flat and there’s plenty of volume control that can be done via a 3-position switch on the Mikey itself. Blue states that the fidelity of the recording is “CD quality” and we’re inclined to agree. Within the Blue Fire app, you can set some more specific recording settings, if you wish.

Physically speaking, the USB pass-through sits on the side of the Mikey. Up top, you’ll find a mini plug for recording from external sources. You can monitor audio, but you’ll need to select the “Play Through” option in the Blue Fire app. The display for input volume seems to be accurate and we’ve not had a problem with clipping.

You’ll find an included pouch with the Mikey and not much else. But there’s not a lot that you’d need. Our sole complaint about the Mikey is that it doesn’t feel as sturdy in the connection as we’d like. It’s not as if your Mikey will go crashing to the ground, but it does have a big of wiggle room that we’d rather not see. That doesn’t, however, seem to affect the audio quality.

To finish, here’s a little sample recording. Whether you’re recording live music, a speech or singing some Rick Astley in the car, we’re sure you’ll be impressed with the Mikey 2G. It really is the best way to turn your iPod Touch into a serious recording device.