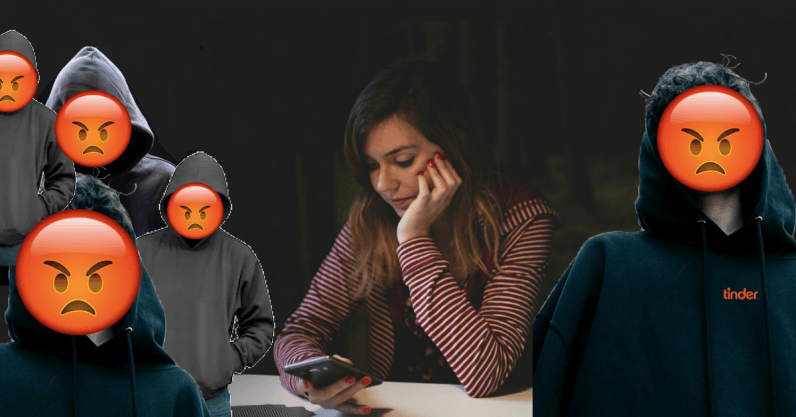 The world of online dating is a fraught one — filled with creeps, bad intentions, and painful chat up lines. Apps like Tinder, Happn, and Bumble have changed the dating game by making it easier and more accessible, but in return they’ve created an online culture of abuse after rejection.

Which is why Alexandra Tweten created @byefelipe in 2014 — an Instagram account dedicated to publicly shaming trolls who turned hostile when rejected or ignored on a dating app.

The account has clearly struck a chord with women all around the world and now boasts over 426k followers.

No one likes rejection, but the troll-shaming account calls out the ‘best’ of the worst responses to not taking things further online. Some of the most common posts include screenshots from overly-sexual men asking women inappropriate questions like “what is your bra size?” and “what do you like to do to a guy?”

Other than the usual creeps you’d expect to see lingering in a dark corner of Tinder, there’s also the guys who throw tantrums and make threats when rejected or ignored online. These are the guys that quickly turn online dating from fun and harmless to scary.

“My main reasons for creating the account were to commiserate with other women (you can’t be a woman online and not get creepy messages from men), to let men know what it’s like to be a woman online (it’s not all cupcakes and rainbows!), and to expose the problematic entitlement some men feel they need to exert over women in general,” Tweten said in her blog post.

The ghosting issue no one talks about

Shaming sites, such as Bye Felipe, don’t exist to embarrass individual men. They exist to bring light to the often miserable reality of dating online as a woman. Tweten explained in an interview with Huffington Post, “I like to make fun of them on the Instagram [@byefelipe], because it’s like taking away that power that they think they have over women.”

Four years after it’s creation, Bye Felipe has become a safe space for women to discuss their problems, in addition to its role to call out abusive messages from men.

Multiple posts on Bye Felipe’s Instagram account encourage a conversation around this kind of abusive behavior online which spark debate within the community.

Whyyyy do they do this? We talk about dick pics and the Grindr phenomenon of butthole pics on this week’s V Single podcast with one of our favorite comedians, @solomongeorgio. (Listen at byefelipe.com/podcast)

Since dating apps offer a certain amount of anonymity — a short bio, first name, age, and several photos of yourself, there’s a layer of protection over your identity.

But because of this partially invisible safety blanket, polite rejections are often met with abrupt and abusive responses since it’s almost impossible to trace any abuse back to them.

Sure, it’s easy to block them and never have to chat to them again but it’s enough to make a woman never want to try her hand at the online dating again. Since after all, women are more likely to face online harassment.

By publicly shaming and documenting this abusive behavior, the hope is that trolls will soon realize their words and tantrums have consequences (or maybe one day, they’ll find their own conversation screen-shotted on @byefelipe).

Bye Felipe accepts submissions via email and you can stay up to date with the darker side of Tinder on Instagram — I have a feeling they won’t be running out of material any time soon.