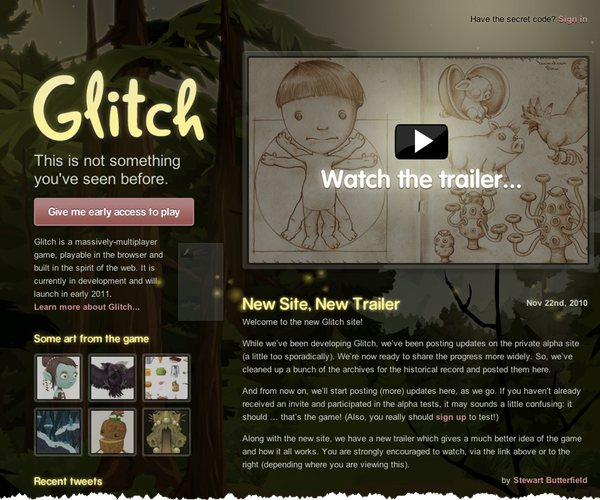 Right, so you might have heard of Tiny Speck, the company Stuart Butterfield started when he returned home to Vancouver. Tiny Speck has been flying under the radar for a bit now. Occasionally it would pop up and let us know what the “grand plan” would be. Several months ago we found out that the plan was a game called “Glitch“. You might be surprised that Stuart (and a few former Flickr employees) are working on a game post-Yahoo. You might be surprised if you didn’t know that Flickr started as a game. Yeah the whole photo sharing thing was an offshoot of the original game.

So like the NYT said today, invites went out recently to about 5,000 people to start playing the game…

and I got one.

I wasn’t able to try it out until this evening, so I missed the 74 hour time the game was open. Which is fine, because according to the agreement to be in the alpha group, I couldn’t show you or tell you much anyway.

While you all begin to wonder what the game might be like, and work on how and who you’ll beg for invites (don’t look at me, I don’t have any), let’s think about social games.

Farmville (which I freely admit I haven’t played and have no interest in) took Facebook by storm and has made Zynga a rather goodly sum of money. So, we like games and more than that I think we like games we can all play together. “Social gaming” is what the NYT calls it, but it’s just like in the early days of BBSes and and MUDs. We can’t always get people to come over and play gin or bridge, but grabbing some time at home (or work) to play a game…well that’s a horse of a different color, isn’t it?

So while I wait for Glitch to open for play again (I’m sure it will be tomorrow sometime), I’ll see if I can buy Stuart a coffee next time I’m in Gastown.

Read next: Ten out of Ten : iOS apps for education