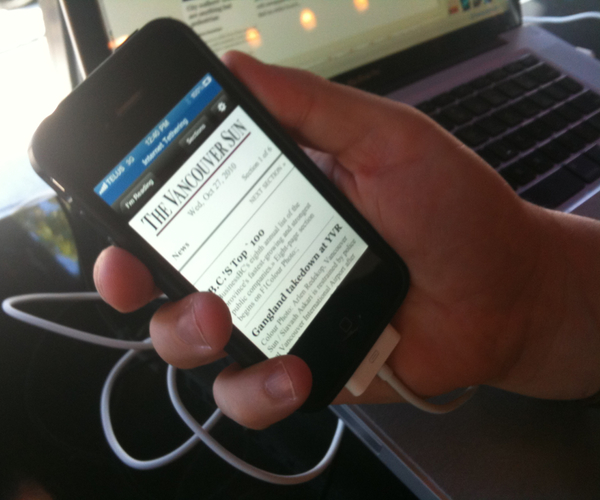 It’s no secret I’m a huge fan of ebooks and Toronto-based Kobo especially. Kobo is where I buy and read all my ebooks (iBooks, who?) and starting today I can get newspapers and magazines as well: Sure, Kobo is just getting into the game here that the Kindle and others have been in for a while, that doesn’t make this any less cool or important. Kobo is offering a two-week trial on all of the books and magazines it offers right now (I’d expect that to continue) and the prices are pretty decent. The Vancouver Sun is $14/month through Kobo and $25/month for home delivery (if you pay for 3 months in advance), the magazines are much cheaper (around $5 or less a month). Delivery is fast and easy, but you do have to update your Kobo app first. Which as soon as I did, The Vancouver Sun was pulled down to my iPhone. Same will go for my iPad (with updates, of course), all synced together. Using the iPhone version this morning,  was impressed with the readability and speed of the app. Swiping up and down scrolls and left-right moves to the next section or article. Skimming becomes an easy experience. The app isn’t perfect though. I can highlight a word to look it up, but I can’t annotate in the text. I also can’t send the article to Safari, email, or Instapaper. Like the article at the right here…this is something that I’d like to look into more and maybe write more about. However, what I’ll wind up doing is trying to find it online and then being able to work with it here. I hope that Kobo adds this feature to the next updates to the Kobo app for iOS (and other platforms of course).

Right now you can’t get newspapers or magazines on the desktop app. Sure the iOS and Kobo Reader itself are find, but on the desktop, for the moment, you’re out of luck. I think that is okay for the initial launch, not great, but understandable. Much is made of the death of the print industry and how newspapers and magazines are in their death beds, however I think affordable, wireless delivery of newspapers and magazines might just be the ticket. No, there are no ads in The Vancouver Sun content that I was reading, so maybe that might have to change, but frankly I’m more interested in getting the newspaper if I can just have it ready on my iPad when I check my email over breakfast than having to deal with newspapers at my door. Maybe I’ll just keep that Vancouver Sun subscription going. Might add the Globe and Mail too while I’m at it…