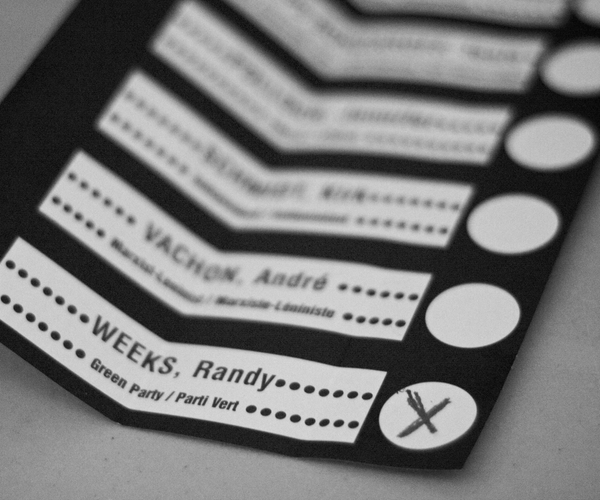 It’s not often that reading feeds over my Sunday coffee compels me to get up and write something up as fast as I can. This morning I read a press release from the new Online Party of Canada. The who? The Online Party of Canada, a brand new effort to bring the democratic process to the Internet. While I think it would be easy to scoff at what they are doing, and some of their policies are a little out there (lower the voting age to 16?), but the idea of using the Internet to foster more equal discussion on issues is laudable.

From the press release:

OPC regularly proposes issues for registered Members to comment upon and cast an educated vote. Posted issues to date include Canada’s participation in Afghanistan, reducing the voting age to 16, legalizing prostitution, marijuana, free post-secondary education, reforming the electoral system and abolishing the constitutional monarchy. Local issues are also proposed to voters from particular areas (e.g., province or city), such as free public transportation in Toronto and eliminating separate schools in Ontario.

Michael Nicula founded the OPC as a reaction to what he perceives as a broken political system in Canada, hoping that the Internet could democratize the system. But there are serious flaws in his approach, a few of which are anything but democratic.

First, basing participation on using the Internet. While Canada is one of the most wired countries in the world, 100% of the electorate doesn’t have access to the Internet. Everyone in Canada can get some other kind of media, but the Internet? We’re just not there yet. Even if we did have 100% access, we don’t have 100% ability to use the Internet. Both access and familiarity with the Internet is something that is far from universal.

While education and more public access to the Internet could help solve this problem, there is a more fundamental flaw in Mr Nicula’s plans. Membership is tiered. Here is another quote from the press release:

OPC invites young professionals to join this innovative political process; for example, Masters- and Ph.D.-level individuals in Political Science, Media and Communications, Law and Economics are eligible to represent OPC in elections as ‘candidates’ for public office and/or act as ‘specialists’ on the OPC website (i.e., members with enhanced privileges such as the ability to write new issues and provide expert opinion). Specialists and candidates must meet minimum educational standards and possess relevant qualifications and work experience.

Right, you can’t be a candidate unless you are well educated. Some of the smartest people I know never graduated high school, people who understand the subtleties of public policy, development issues, and the issues facing our country maybe better than someone who has a piece of paper or two from a university. The tiered-membership doesn’t end at just candidates, its a fundamental part of how the party is organized:

Level 1 – Guests. Anyone with an E-mail Address can be a Guest and share their opinions. Their votes will be counted separately and used for reference / statistical purpose only.

Level 2 – Members. Canadian Residents and Citizens, anyone who can legally cast an Elections ballot, can become a Member. Must fill out a membership form, mail it over and complete their Online member profile.

Level 3 – Specialists. Any Member (Level 2) can apply to become a Party Specialist. The application might need to be supported by credentials and other materials and might require an interview. Specialists can create and manage Issues and Issue Positions for all other members to vote on.

Levels 4 – Party Candidates. Any Member (Level 2) can apply to become a Party Candidate for public offices: Federal, Provincial or Local level. A voting session will be associated with each of these positions and will be permanently open.

Level 6 – Administrator. This is related to the Website administration activities: validating and verifying membership information, managing users, executing internal appointments and revocations for level 4 and 5 user changes as directed by the Party Officers’ Panel.

One of the fundamental parts of a political party is that all members have the same potential to rise through the ranks and be officers or candidates. I’m sure the intent is to help shepherd the discussion, but in reality by making the focus of the party as Internet only and then intentionally segmenting the potential members and candidates by their education or potential worthiness, the party becomes anything buy democratic at all.

Update: I just saw this piece on Fortune/CNN about Government 2.0 which is approaching this idea of using the Internet in government from another direction—from within the government itself through its regular employees.