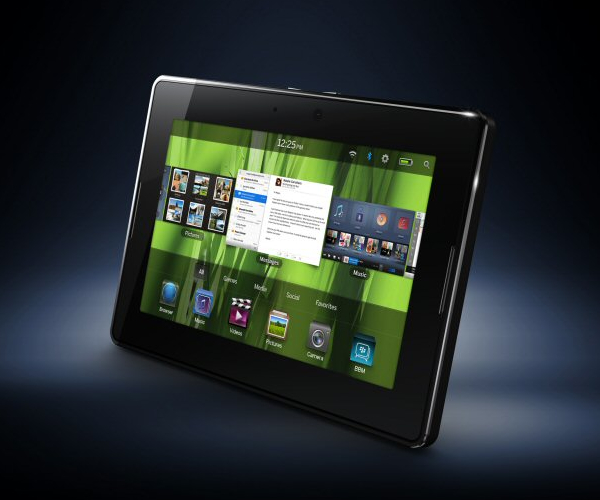 The news from DevCon 2010 is just breaking that RIM has announced the new Blackberry Playbook tablet to go head to head with the Samsung Galaxy Tab and Apple’s iPad. Everything is pretty new right now so first here are the top-line specs (from the press release):

Key features and specifications of the BlackBerry PlayBook include:

Not so cool: WiFi only for launch. From what I’m reading, it the Playbook will be available in early 2011 in the U.S., Q2 in other markets.

My first thoughts are that aside from the lack of 3G, this sounds like a very impressive tablet. It certainly has all the specs that people were hoping for. The dual cameras (which supposedly can record HD video at the same time) are a huge plus. Bluetooth syncing and connecting to your Blackberry device to share information and screens sounds like it could be a 3G connection over BT (again from the press release):

For those BlackBerry PlayBook users who carry a BlackBerry smartphone*, it will also be possible to pair their tablet and smartphone using a secure Bluetooth® connection. This means they can opt to use the larger tablet display to seamlessly and securely view any of the email, BBM™, calendar, tasks, documents and other content that resides on (or is accessible through) their smartphone. They can also use their tablet and smartphone interchangeably without worrying about syncing or duplicating data. This secure integration of BlackBerry tablets and smartphones is a particularly useful feature for those business users who want to leave their laptop behind.

Even the YouTube movie for it looks pretty cool

But now the billion dollar question: will it fly?

First off, there is no mention that I can find on the two biggest parts of the equation: price and availability. We know that the Playbook (odd name since RIM is targeting the business user) will be out there, we know what it will be able to do (a lot), but how much will it be? Right now we also don’t know how it will be sold. Is this going to be like the iPad and sold lots of places or the Galaxy Tab and only through mobile carriers?

Never mind that we don’t even know what capacities it will be offered in, that’s just icing I guess.

I think the Playbook will be a worthy challenger to the Galaxy Tab and iPad, if the price is right  and you can buy it freely and there are great apps for it at launch (it sounds like the Blackberry 6 apps will work on it, but I’m going to guess they would look like iPhone apps on the iPad).

We’ll update this post with more as the story develops, but until then, sound off in the comments

BTW, here is my interview with the CBC from before the PlayBook was announced. I think I called it pretty well:

Read next: Forget where, Who is Waldo?!