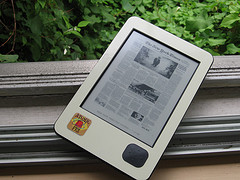 Toronto-based Kobo is hoping that its David and Goliath battle with Amazon and Apple in the eReader market will pay off in Amazon not becoming the iTunes of books. While an uphill battle, Kobo CEO Michael Serbinis isn’t just betting on consumers wanting more (and flexible) ereader options, he’s also sees publishers and authors as key allies in the fight.

In an interview published on the CBC Technology section, Serbinis highlights his feeling that many authors might forego a print run entirely and go electronic at first:

Will we see more people self-publish? Absolutely. Will we see publishers go to digital first instead of print first? Absolutely. There’s nothing more disappointing than spending a million bucks on an author, then having 50 per cent of the books returned from retailers because they didn’t sell. Is it better to put out a digital run first to test it and see if it gets any pickup, then do a print run? Yeah, for some authors it does. Read more.

As a published author with more than a few book left in me, I am very excited about the eReader market. I have a growing pile of paper books that are also growing a cover of dust as I pass them over in favor of reading books on my iPad (and I prefer Kobo as my reader and bookstore). Would I consider writing a book and publishing an electronic version before a print? No doubt. In fact, I think my publisher (Pearson Technology Group) could see this as a good way to offer more niché titles with faster turnaround than publishing a paper version. If a publisher can reduce costs and risk, they can take a chance on more titles.
As far as Kobo’s plan to be a major player in the eReader market? It’s going to be a hard play. Amazon has mindshare, Sony is a tough customer, and Apple might not  be putting a lot into iBooks, but don’t count them out yet. One thing that I think is a fair bet; eReaders continue to change how we’re buying and making books.
Thumbnail photo by Ian Martin of Atomic Fez Publishing

Read next: David Crow leaves Microsoft, back into the startup fray