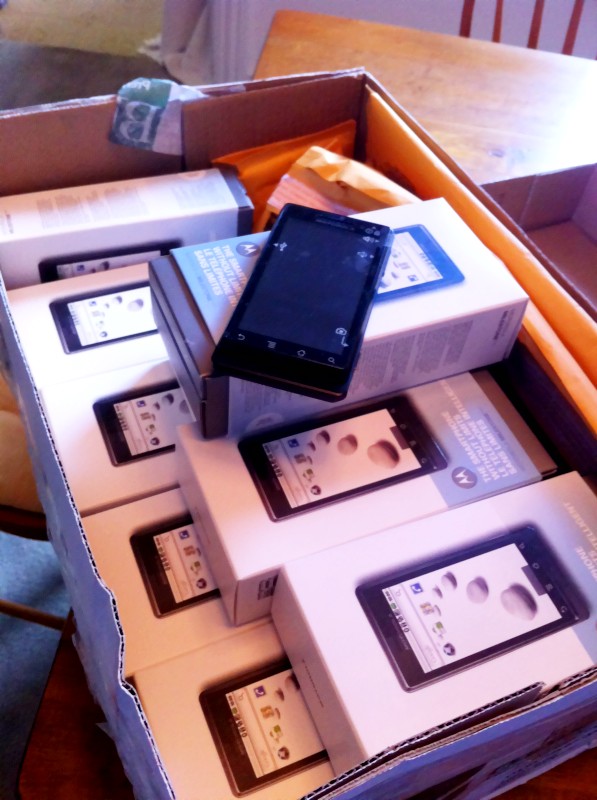 In less than a decade the face, and technology, of journalism has changed drastically and irrevocably. Now reporters have scores of bloggers, like me, to contend with when covering news, breaking and otherwise. It would be easy for journalism schools to tack working and using mobile and online tools in as after thoughts in their students’ education, but not at Ryerson University in Toronto. At Ryerson the journalism students are being throw head-long into the online fray and it’s all Wayne MacPhail’s fault. Last term Wayne started using mobile tools in his Online Journalism class, with the idea that news and stories are happening out there and everywhere and armed with the right tools and technology reporters were better able to cover the news. The problem was that not all the students had newer, powerful smartphones. A mix of devices and technologies made teaching the class a challenge, not this term, this term all the students have new Motorola Milestone (aka Droid) phones with plans and data supplied by Telus. Now Wayne and his students can all work on the same platform with the same (powerful) technology and, well, rock the world of online journalism.Wayne’s class might just be the first fully mobilized journalism class to start changing how news is going to be covered and reported.

Fine, journalism students rushing out to cover the news isn’t really news, but how and why they are doing it is news. Wayne believes that journalism in the future is going to be dominated by mobile devices and even hyper-local reporting (like what the Toronto International Film Festival is doing with Foursquare). The ability to be where the news is happening and start sending audio, video, images, and text, as the news is happening is what people expect now, so students need to learn how to do it and how to do it right. I think we all can agree that instantaneous news reporting can have huge pitfalls, so the Ryerson students have some tricks up their sleeves.

First is the backend to support them. Wayne explained that the awesome technology (Milestone/Droid) doesn’t help you very much if it’s a struggle to send content out into the cloud. To fix that, the class is using a public Posterous blog to gather material, OpenFile to create stories and a private PBWiki-powered back channel to discuss how things are going. The other aspect, and probably the more important one, is how the students are learning the new world of journalism.

At the beginning of the term Wayne had the students stake out a neighborhood coffee place (I’m going to assume good wifi and great coffee were must haves) where they would be essentially embedded for the term. They were tasked with learning the ins and outs of the community. What at the stories, what are the issues, what’s the news there. So after a short bit of lecture time, the students spend the rest of the six hour class in their coffee place working. There is a civic election coming up in Toronto, so that is certainly hot news. What better place to learn about grassroots issues than to be sitting in a coffee shop for several hours at a shot? That’s the kind of new story-telling and reporting the Wayne is going for. Not to mention the students really get a lesson in being mobile, working in a third place, and what digital life is all about.

Wayne is encouraging his students to look at narrative and story in a new way. The inverse pyramid isn’t as relevant any more when many of us consume our news in snippets gleaned from RSS, “river of news” and other aggregators. The students have to learn how to weave more aspects into a story it will, and can, be found in a more atomized way. His students are learning that they can enrich their stories by using the crowd instead of fighting it. The Ryerson class this term starts on Monday, but the Posterous site is ready now, you can check out similar sites from his classes at Western and last term at Ryerson.

Read next: Samsung Cuts US Carrier Deals, Gets Sept 16 Unveiling