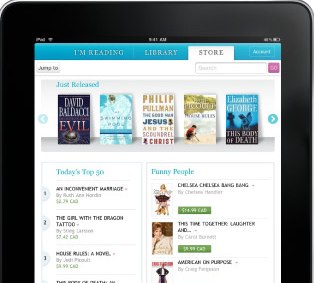 Matt talked about the new Samsung Galaxy Tablet that was announced, while he focused on the price a bit of Canadian news caught my eye—Samsung launches Galaxy Tab with Kobo e-reader (via CBC News)—that I think changes the game in the soon-to-be-launched tablet wars. Up until now I think there has been a lot of focus on what companies can do to “defeat” the iPad, but I think one weak spots in Apple’s armor might just be ebooks and iBooks itself.

Kobo is the Canadian-made ebook reader and app (Blackberry, iOS, Android, and Palm Pre) that is supported by Chapters Indigo in Canada and Borders in the U.S. What I found in my time with my iPad is that I like the Kobo reader much better than iBooks (I didn’t like the Kindle app much, and I didn’t have any books purchased through there either). Not only is the reading experience better, but the selection of book and the prices is better as well. Case in point, the Millennium Trilogy (The Girl with the Dragon Tattoo, The Girl Who Played with Fire, and The Girl Who Kicked the Hornet’s Nest) isn’t available on iBooks. Couple this with the very good prices (in Canadian dollars) on the Kobo store, well, that’s where I’ve been buying all my ebooks.

So Samsung picks Kobo to be preinstalled on Galaxy Tabs (not Kindle I noticed), which is a strategy that might very well pay off for Samsung in getting the Tablet into more people’s hands. The, “oh but I’d like to read books on it…” consideration is now countered with “well Kobo and some books are included by default…and you can read a book purchased there anywhere, unlike iBooks…” If I were Apple, I would look at iBooks as a part of the iPad that might just not be their next big revenue source. It isn’t a great ereader, the selection of books isn’t great, and you can only read the books on your iOS device. Alex already took some of the luster off iBooks with the fact that the Kindle is still outselling iBooks by a huge margin (60 to 1), so what does this mean for Apple and its hope to wield power in publishing like it does in music? I think it means that Apple is going to have to do better. I’m not saying that iBooks is doomed, but what I think will happen is that iBooks will just have to become more open and compatible to stay centred as a key app.

In the meantime, good choice in ereaders Samsung, I hope it helps tablet sales.

Read next: You Are Now My Inbox Peasant - Confessions Of An Email Slob