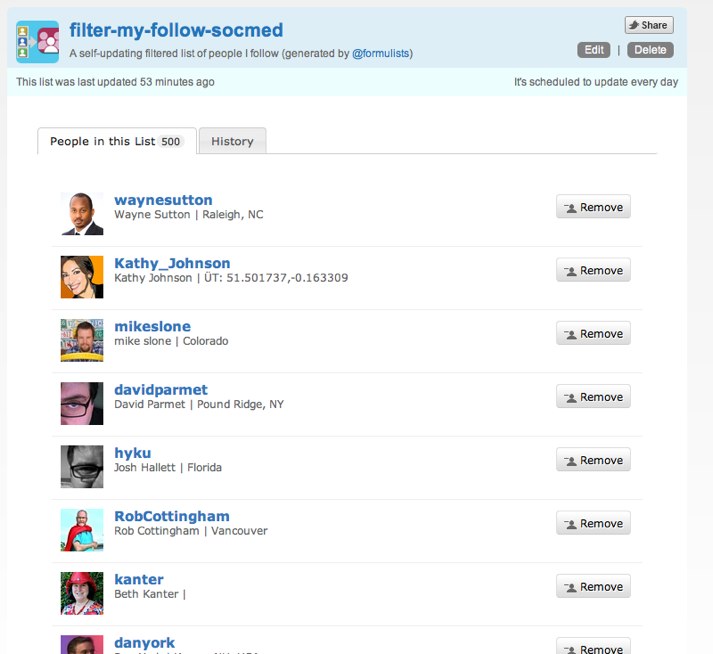 During a Twitter conversation with Jenn Van Grove about the new (official) Twitter client for the iPad, the topic wandered into Twitter Lists. I follow about 5900 people on Twitter and the only way I can separate the wheat from the chaff is using Twitter Lists (formerly TweetDeck groups) to put the people I don’t want to miss into discrete columns that I can keep on top of (even though I know that I’m soon going to max out the number of people I can fit in these streams). As an offshoot of the conversation the Vancouver-based company Formulists pinged me. I thought, okay, what’s this all about. Turns out, like Conversationalist, they are about helping you create effective Twitter lists. The product is in alpha right now, and was having trouble processing new lists quickly today (my account is pretty big with following 5900 and about 7400 follower), but what I’m seeing is pretty interesting in its potential.

First when you go to Formulists, they only allow a few people a day to be added as new users (unless you have an invite…which I now have to share with you, more on that in a second), so if you don’t get an invite, keep trying. Once the Twitter OAuth dance is done you’re prompted to create new lists. Let’s use the example of trying to find “people” like TheNextWeb, that would be tech news, links and information. You choose the “Find New People” Category, then People-Like-Somebody. The last step, unless you want to tweak the settings, is to just enter the Twitter ID of the person to match (make sure you keep the @ in there e.g. @TheNextWeb) and click “Create List”. The default is a private list (which is nice) so you could even use this to build a little competitive intelligence list for yourself. Complex lists like “People-Like” and others take some time to crunch through, but I make a list of people who list me on other lists and one of people I follow who have “social media” in their bio. Both of which gave me expected results.

Yes, you can use this tool to create and manage “regular” Twitter, but I don’t think that’s a good use of the tech, the power is in the automated lists like who you retweet, you have recently followed, and the more interesting automagic list building tools (like someone-like-). Since I’ve just been using the service for a day, I don’t expect a lot of cool, new people to follow yet, but I’m going to keep an eye on it for the next few days to see what bubbles up.

Now, I did mention that Formulist is only letting a few people in per day, but once you’re in you get invites for your friends. So, friends, I have five invites up for grabs. First five people who leave a comment (and I need your Twitter ID too) will get an invite in to try it out.

Read next: Twitter Now Has 145 Million Users, Total Mobile Use Up 62%