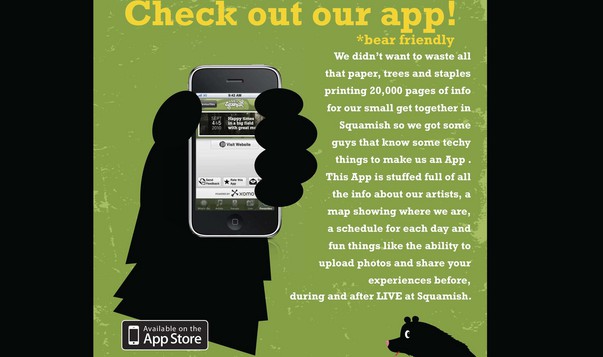 As a close out to the summer, the folks in Squamish, BC (halfway between Vancouver and Whistler) are having a big music festival this Labour Day Weekend— Live at Squamish – September 4 & 5 2010—which in itself isn’t a huge deal, but what I think is particularly cool is the iPhone app they released for it—LIVE at Squamish – Your FREE Festival Guide for iPhone, iPod touch, and iPad on the iTunes App Store.

The app has the usual schedules, band information, and venue information, but also pulls in pictures submitted through the website and social media sources. The Twitter button, as far as I can tell for the moment, only pulls in tweets from the official Twitter account. Oh sure, that’s great and all, but I think it would be better to pull in the official account, mentions, and a hashtag or two. With the app I can check updated schedules (in fact when I launched the app to double-check something it downloaded a new schedule automatically) and all the information needed to enjoy the shows, but that isn’t the bigger picture, far reaching point here.

I doubt many of you will download the app, that’s okay because while it’s cool, it’s also only useful if you’re going to the festival (or interested in the bands). However I think it’s pretty safe to say that if you’re throwing an event, even once as short as a few days, creating an app for it will certainly help people at the event enjoy it more. The Toronto International Film Festival has a Blackberry app that let’s you keep up to date with what’s going on while the festival is going on (it helps that RIM is a major sponsor), but this brings me to another point:  try to be more platform agnostic. I realize that creating an Android app, Blackberry app, and iOS app isn’t feasible for every event, so you have to pick your battles. Solutions? Well Vancouver’s Mobify, is certainly worth a good look. Their process makes an app that works on a variety of platforms, but that might not be sexy enough for all events. Nope, I don’t have an easy answer. Sure, I’m a little biased that I think an iOS app might be your best bet for creative events, but I know as well as you do that iOS devices aren’t the be all and end all. I think the main lesson here is that more and more people are using smart phones to manage their lives. Those people want to be able to have all the information they want and need, when and where they need it. If you’re throwing a big music or film festival, making sure that people know what’s going on when is crucial.

So it goes without saying…there’s an app for that.

Read next: Righting your writing on the iPad. That's Tactilis.