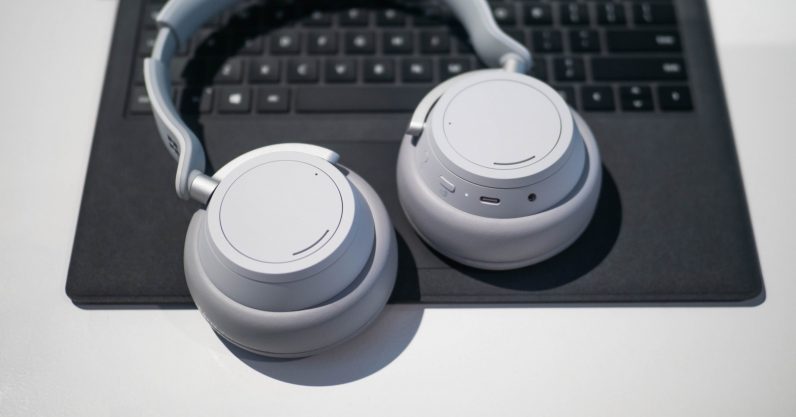 Welcome to TNW Basics, a collection of tips, guides, and advice on how to easily get the most out of your gadgets, apps, and other stuff. Buying a set of surround sound speakers can be an expensive endeavor, generally requiring an A/V receiver and at least for speakers (but probably more). Alternatively, you could shell out the dough for surround sound headphones like the Audeze Mobius. But what if you want to hear surround audio with the headphones you already have? In 2017, Microsoft added support for ‘spatial sound’ in Windows 10 and on the Xbox One, opening up surround capabilities to headphones ranging from cheap earbuds to $3,000 audiophile favorites. Users have the choice between Microsoft’s ‘Windows Sonic’ technology, or the popular Dolby Atmos technology (a $15 add-on). A third option, DTS Sound Unbound, is on the way. These technologies work by leveraging the peculiarities of our auditory system.

Sound that hits our eardrums first needs to pass through our bodies. Your brain is able to interpret the difference in timing between sounds arriving at each ear, as well as how they are modified by your earlobes, head, and torso, in order to pinpoint the source of a sound. The way sound changes as it passes through your body is called the head-related transfer function, or HRTF for short. https://youtu.be/0sVQxHu1nBg Because headphones and earbuds lie so close to our ears, sound is not modified the same way it is when listening to a pair of speakers or live music. The goal of virtual surround systems, therefore, is to attempt imitate our HRTF to “trick” our brain into thinking sounds are coming from various directions (as opposed to the usual “in your head” feeling of headphones). For an idea of how much more spatially convincing headphones can sound by leveraging our HRTF, you can listen to well-made ‘binaural’ recordings. In these recordings, microphones are placed in a pair of ears – either an actual person’s or those of a dummy head. This way, the recorded sound you listen to has already been modified by a head. The realism of ‘virtual barbershop’ demo always manages to make me cringe. Listen with your best headphones for the most convincing effect – it won’t work through speakers: https://youtu.be/9HCFOF-5nUw It won’t be perfect because the microphones weren’t placed in your head, but the spatial effect should still be convincing than plain old stereo music played back on typical headphones. Virtual surround systems use algorithms based on average heads and earlobes, so they will rarely sound perfect, and generally have some difficulty presenting sound directly in front of you. Still, they can make for a more immersive movie-watching experience.

Turning on spatial audio in Windows 10 takes but a couple of clicks. Simply right click on the audio icon on your taskbar, hover over ‘spatial sound,’ and select either ‘Windows Sonic for Headphones‘ or ‘Dolby Atmos for Headphones.’ 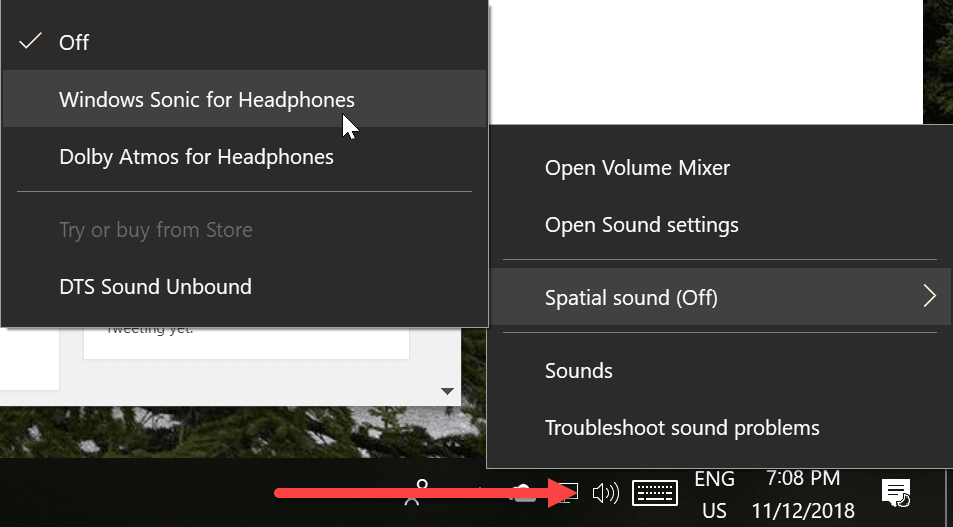 On the Xbox One, simply navigate to your console’s audio settings, by going to System > Settings > Display & sound > Audio output. From here, you can select one of the spatial sound technologies. You’ll be asked to pay $15 dollars to use the Dolby tech, though it’s free to try for 30 days. DTS will also show up as an option as well, at the time of publication, the Windows Store app is not yet available to install. Keep in mind that the features don’t do much for stereo audio – you’ll have to be listening to surround or Atmos content to appreciate the more immersive experience. Make sure any movies you watch or games you play are actually outputting a surround signal. As for which technology is better, it’s a matter of preference. Sometimes, I think Windows Sonic sounds better, other times I think Atmos has the edge. Of course, Atmos has the advantage of working with Atmos-encoded movies and games in addition to plain old 5.1 or 7.1 surround. We’ll have to see how DTS measures up once it actually becomes available.

Read next: How to go the fuck to sleep