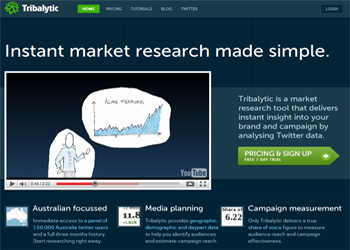 Two weeks ago we ran an interview with BinaryPlex co-founder Tim Bull and spoke about his company’s new twitter tool – Tribalytic.

The way Tribalytic does this is by using a market research based panel approach, which means that it constantly listens to over 150,000 Australian Twitter users. This allows businesses to research broadly across any related issues. The company says that this offers significant benefits over typical monitoring tools which only listen to the conversations of the specific keywords you enter.

“Businesses are maturing in the way they use data from social media” said Bull.

“They want more sophisticated measures than simply counting every mention of their brands. Information needs a historical context and the ability to see other conversations that are occurring. Tribalytic lets you do this instantly.”

“While people are engaged on numerous social media platforms, Twitter is a linkage between many platforms. Its open culture means that a lot of insight can be gained by focussing on Twitter conversations.”

As to why they’ve decided to focus on Twitter as opposed to Facebook or some other platform, Bull had this to say:

“Facebook is more restrictive when allowing third-party tools access to its data and if you already have a fan page, it has tools built into its platform which allow you to analyse your demographics,” says Bull.

“Twitter lacks tools that deliver this kind of market research sophistication. We saw the opportunity do a lot more for businesses in analysing Twitter than just counting the number of tweets.”

If you’re keen to check out Tribalytic for your business you can signup for a free trial at http://tribalytic.com including daypart (time of day) analysis, location demographics, influence measurement and the ability to quickly and easily segment and identify the conversations around any terms used by the panel of Australian Twitter users over the past three months.

And, if you’re interested in finding out some of the quirkier things Tribalytic has discovered about Australian Twitter users then check out the Tribalytic blog.

Read next: Canadian Apps Now Highlighted in the App Store