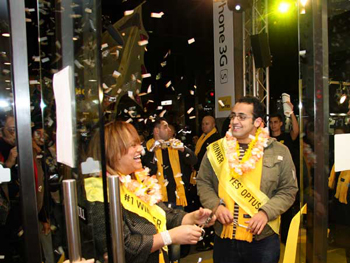 When Steve Jobs said in his recent press conference that the iPhone4 would be on sale in Australia on Friday July 30th he wasn’t joking.

We’ve had official confirmation that Optus, at least, will be hosting midnight launch parties next Thursday (to be precise the launch will happen at 12:01am on the 30th) in their flagship stores in Sydney, Melbourne, Brisbane and Perth.

Being the middle of winter, that news will come as welcome relief to the many people who thought they were going to have to camp in the street throughout the night before they could buy one in the morning.

While there’s no official pre-order form yet (there is currently only a register your interest page) there’s certain to be one if past launches are anything to go by.

Also, as usual, there are no pricing details, with all telcos playing their cards close to their chests for now, but that is due to change “over the coming days”.

While we only have details on the Optus launch, you can be sure that’s a great sign that the other major telcos will be doing something similar.

This launch will be especially interesting considering the recent antenna issues Apple has been facing with the new device.

As the first new launch of the iPhone anywhere in the world since the problems were discovered,  it will be intriguing to find out whether or not demand is affected by all the negative publicity.

My bet? There’s probably  going to be very limited stock at launch and the sold out sign will still be put up sometime in the early hours of the morning, as has happened in the past.

Will also be interesting to see how they handle the iPhone case distribution Jobs promised in that press release.

Read next: Parenting Made Easy: Media by Age App for iPhone