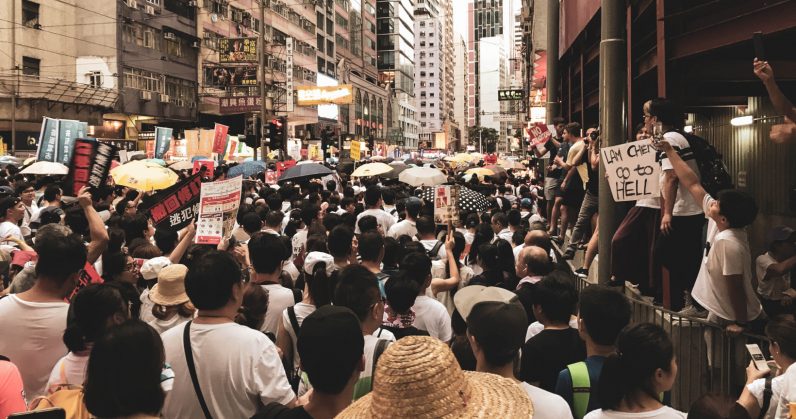 As Hong Kong battles against the proposed extradition bill that would China more power over the autonomous territory, protesters in the city are said to have experienced an outage of Telegram‘s encrypted messaging service yesterday – and Beijing may have had something to do with it.

Demonstrators in Hong Kong have been using messaging platforms like Telegram to organize themselves, alert each other about activities on the ground, as well as information on where to find resources like gas masks and drinking water. Yesterday, the service went down after it was affected by a ‘powerful’ DDoS attack for roughly an hour. CEO Pavel Durov noted that the ‘state-actor sized’ attack was traced to IP addresses in China.

IP addresses coming mostly from China. Historically, all state actor-sized DDoS (200-400 Gb/s of junk) we experienced coincided in time with protests in Hong Kong (coordinated on @telegram). This case was not an exception.

If that’s true, it’s a worrying indication of the lengths China will go to wrest control from Hong Kong‘s citizens over the issue of extradition of criminals to the mainland. It’s also a clever tactic to use when your target encrypts the contents of messages: bombard the server with traffic and overload it, so no one can use it.

The war on messaging platforms in Hong Kong goes beyond DDoS attacks. Financial Times noted that Hong Kong police arrested a 22-year-old man earlier this week, on suspicion of conspiracy to commit a “public nuisance crime.” He ran a Telegram group with more than 20,000 users that discussed tactics for dealing with the police during the protests. The man was subsequently released on bail.

Debate of the #extraditionbill was postponed as #HongKong descended into chaos. Police fired tear gas and rubber bullets at protesters, many of whom were prepared with umbrellas, goggles and masks. https://t.co/qlB7j975ki pic.twitter.com/CqpdLdBlFe

There’s plenty at stake for Hong Kong: if the bill passes, criminal suspects will be extradited to China when the country decides it’s necessary. That could also allow China to nab dissidents and those opposed to its government on bogus charges.

"Carrie Lam has proved just a little puppet of her Beijing boss, and she would just do anything the Beijing boss tells her to do."https://t.co/GXb7GC5T7r pic.twitter.com/CkrcSxHieI

No wonder more than a million people (about 1/7th of Hong Kong‘s population) took to the streets this week to protest the bill. Godspeed, HK.