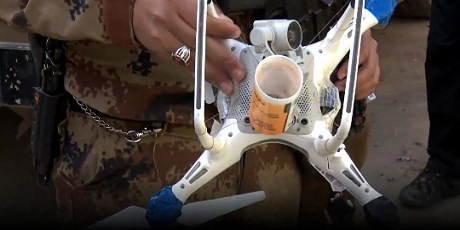 With its hold over territories in Syria and the Northern Iraqi city of Mosul slipping steadily, terrorist group ISIS is finding itself forced to improvise in its battle against Iraqi Security Forces (ISF). Its latest weapon: Bombers fashioned out of commercially available drones.

The radical outfit has been fitting drones with grenade-sized explosives that it can drop remotely or detonate on suicide missions. While they’ve mostly been targeted at the ISF’s front-line troops (mostly because the battery-operated drones have a short range), Kurdish publication Rudaw noted that they’ve also killed civilians and damaged equipment.

ISIS has actually been working on drone bombers for a while now: a U.S. Central Command official told Defense One, “Over the last two months, coalition forces have observed about one adversary drone every day around Mosul.” Plus, drones have been in use for other purposes like scouting missions – perhaps as far back as August 2015.

It’s chilling to think of the lengths that ISIS will go to attack its enemy, even when the terrorist group is seemingly almost at its weakest. The drones have not yet been used to deliver chemical weapon payloads – but that’s still a possibility.

However, Popular Science notes that because the quadcopters currently being used by ISIS are mostly off-the-shelf models, they are fairly easily taken down by devices like the Battelle DroneDefender that can jam their GPS and radio signals. The ISF has already managed to down a dozen drones already with such tools.

Read next: How machine learning is ushering in a new age of customer service