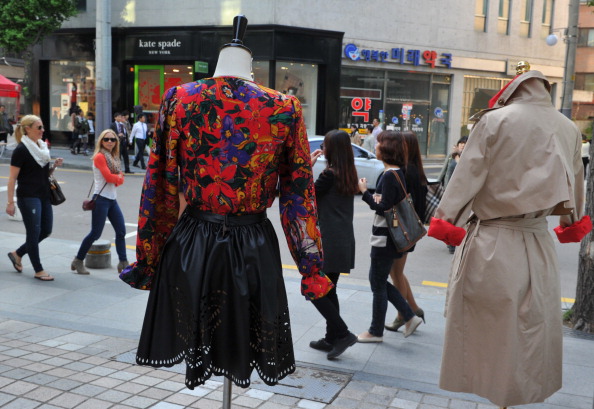 The platform will be introduced in Taiwan as a trial, with an eye towards further expansion in the future.

As one might expect given the three firms involved, O’Share is a social e-commerce site with an emphasis on women’s fashion, and its distinguishing characteristic is its image search functionality.

Users can upload pictures or image URLs featuring an outfit or item of clothing to O’Share, and the platform will deliver a tile-style results page with matches for the outfit in question.

Here’s what happens when we upload a picture of Emma Waston:

When the user clicks on an item, they’re given the item’s price in New Taiwan Dollars and the option to learn more about it.

Upon clicking on “learn more,” the user is promptly directed to Rakuten Taiwan’s website. Presumably these items will be available for purchase there, though we were told Rakuten Taiwan had no results for the item above, indicating that the project is still in development.

Rakuten states that the O’Share is a pilot project for the Taiwan market, which the firm refers to as having some of Asia’s highest penetration of tech-savvy fashion lovers. Toru Shimada, Senior Executive Officer of Rakuten and CEO of Rakuten Asia, commented:

Rakuten is always on the lookout for like-minded players and we are very excited about this partnership with Clozette. Taiwan plays a very important role in Rakuten’s global business strategy as it is our success indicator for new, innovative Rakuten services. We look forward to expanding this concept to the rest of Asia and beyond.

Rakuten has historically struggled to replicate its success outside of Japan – earlier this year it reportedly backed out of its joint venture with PT Media Global in Indonesia, and in 2012 it reportedly severed ties with Baidu after their Chinese e-commerce platform flopped.

In spite of these setbacks, Rakuten remains eager to rebound. It’s an investor in Pinterest, the mother of all tile-style social networks, so today’s move is further confirmation of an interest in image-based e-commerce models. Moreover, the image-search functionality, if it’s well executed, would place it at the forefront of e-commerce innovation-wise, in both Asia and elsewhere. It will be interesting to see if O’Share will be the platform to make Rakuten the major regional player that it aims to become.

Read next: Nokia's HERE Maps lands on the Asha 501, points to ongoing app support for the revamped platform