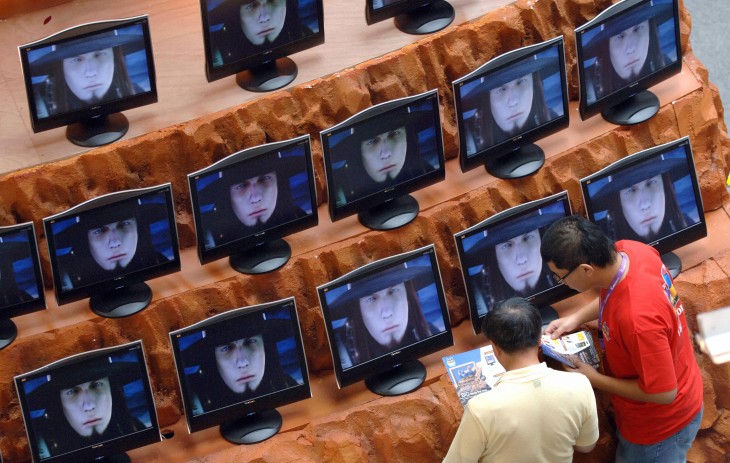 Chatting to my former roommate this past week, she told me of her plans to apply for work with the global NGO Pragya. This “AWESOME” (in her words) organization is development on wheels; they bring various services to communities forgotten by the large scale development movement, originating in the high altitude region of the Himalayas before expanding to continents across the globe.

On the continent of Asia, another development-on-wheels brainchild rolls on, focusing on a relatively new but essential aspect of 21st century development: digital literacy.

Via a grant from the National Youth Commission, Executive Yuan, I spent the latter half of last month on the island of Taiwan, serving as a Taiwan Trek Ambassador to what’s commonly known as the “heart of Asia.” The grant let me fulfill my self-designed itinerary, “Free Market Media: How Taiwanese News Promotes Citizen Journalism.” My mission: to explore Taiwan’s media market — the freest in Asia — and offer the world a window into what the mainland’s “naughty little brother” (to quote an unnamed media exec) does to address global issues on a local level.

The best example I met on my visit was The Association of Digital Culture, Taiwan. Its list of projects, ranging from citizen journalist platforms to university education, is too long to profile. But Portnoy Zheng, the ADCT’s acting manager, offers a good summary.

“To be brief, we are a group that [visualizes] the right path for Taiwan’s Internet development,” Zheng explains. “And one of our major goals is to bridge the gap of digital divides between different areas and communities.”

What is this divide? Typically, it refers to digital exclusion — the idea that as services ranging from health care to car taxes move exclusively online, those with an inability to use the net are left behind. Lest you think it’s a nonissue, a quick look at any given country’s digital literacy shows that a well-connected population corresponds to a (relatively) thriving economy. With data showing that just 13% of Swedes remained offline in 2010 compared to 99.5% in Cambodia, the parallel is clear.

When it comes to mobile and digital literacy, Taiwan is the little island that could. With a population of 23 million, the Republic of China houses more people than the continent of Australia; by 2002, the offering of one mobile service per citizen had been reached, a major milestone in telecomm. By 2008, 70% of all homes in Taiwan had Internet connections, and 80% of all homes owned PCs. And as of this year, the island’s Internet economy accounted for 5.4% of overall GDP.

So in a market which has led digital literacy, where does this divide lie? Does it even exist?

Zheng thinks so. In Chinese media, he wears many hats. For seven years, he’s helped run the Chinese version of Global Voices in Chinese, an online platform for citizen journalism that first came out of Harvard. He’s also the mastermind behind Mongolian citizen journalism project NomadGreen, plus the Taiwanese app review series PunApp. Alongside these projects that put media in the hands of citizens — digital literacy at its finest — he also manages the ADCT.

Founded in 2006, the ADCT was formed by several bloggers who aimed to explore how Web 2.0 was being used throughout the island. Citizen journalism’s one piece of this much larger puzzle; with digital literacy proving to correlate with econ performance, as well as opportunities to earn various benefits, the ADCT wants to explain that mere possession of media’s not enough. There’s a real digital knowledge gap between different areas and communities throughout Taiwan. The ADCT aims to change that.

“From our experiences, the gap does not really lie between different areas, but between different mindsets: parents and children, managers and staff, tech-savvy colleagues and tech-lagged colleagues,” Zheng told me. “In order to change the mindsets and habits, we select simple and free services to lower the entrance cost, to let people know that computers are not that difficult and complex. And because these techniques can easily be utilized repeatedly in life, there is no ‘ability’ problem, only a ‘will’ problem.”

In Taiwan, for example, only 29% of citizens aged 55 or older use the Internet. But since Zheng admits this isn’t a problem unique to the island, does it really warrant an entire NGO? Are the implications set to hinder the illiterate on local as well as global scales?

The Guardian‘s Jessica Fuhl thinks so. In an article last month, she called the digital divide a social care issue, writing in the midst of the UK’s attempt to reach eight million citizens who had never used a computer during the Online Centres Foundatin’s Get Online Week. Fuhl’s case is a compelling one: she cited statistics that the government wants 80% of applicants for universal credit to be online by 2017; those who can’t access email/social networks will miss out on crucial savings.

Fuhl also cited digital pioneer Martha Lane Fox as an example of why digital inclusion has financial benefits. Fox’s 2009 report “found that 62% of the adults who had never accessed the internet were over the age of 65; 51% of those with only basic secondary school education were digitally excluded; and more digitally excluded adults needed more frequent contact with public services.”

Government involvement in digital literacy is something Zheng’s familiar with. Upon observing attempts to give gadgets and laptops to rural areas, the divide was no closer to improvement. The medium may be the message (or not), but the idea that handing rural citizens the medium for media development without knowledge to go with it was a problem.

So in 2008, Zheng and the ADCT founded the Puncar Action Project, a Web 2.0 academy on wheels. With digital literacy lagging in southern Taiwan compared to the north, Puncar brings laptops and wifi to those who’ve rarely, if ever, used them, alongside professional tutors. Teaching courses in activity and NPO centers to students of all ages, the en-route academy offers skills tailored per student — from helping tribe members register on hospital websites to digital applications that teach social workers how to accelerate data work.

“What makes Puncar Action different from other digital divide bridging projects is that we never decide what should be taught before we interview and discuss with our future students,” Ricky Feng of the ADCT explains. “Consensus is very important, and we can modify our course and temple for different targets. We use less time to teach students what they can immediately put into force in life and work.”

The ADCT’s not the only organization working on this problem; Silicon Valley has addressed the issue as well, noting the ways in which digital literacy, or lack thereof, corresponds directly with additional divides of race, income, and education. Given Taiwan’s extensive indigenous population and tribes that remain active to this day, the ADCT’s work is all the more admirable. It allows tribes the chance to preserve their cultures while using tech to their advantage.

During my visit to Taiwan’s PeoPo citizen journalism platform, Director Chili Hu told me that the Taiwanese media market mirrors that of the US in many ways. The latter may not have quite as much media to choose from — Taiwan boasts 100 cable networks and six evening newscasts to serve six million homes — but the advanced telecomm/Internet infrastructures of both markets make them leaders in this area.

Just as the Taiwanese government chose to address the digital divide, the US now does the same; the Obama administration offers a digital literacy portal, and American Libraries recently wrote a great piece on how the US immigrant population’s hindered by the problem.

But as the cardinal rule of enterprise proves, for every problem, there’s a solution. In Puncar, Zheng has found his. Will you create your own?

If you know of any additional digital literacy enterprises, share them in the comments.

Read next: New exploit could give Android malware apps access to user data on Samsung GS III, other devices