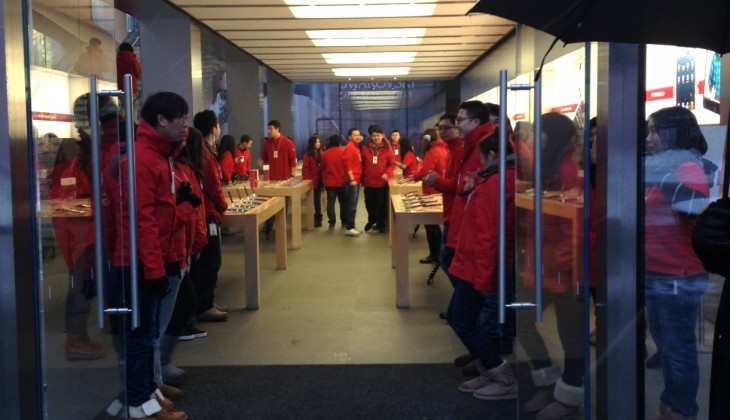 Apple has begun sales of the iPhone 5 in China, its second-largest market. Doors opened at official retail stores at 8am, though the company’s reserve-and-pick-up system dampened launch crowds.

A rare Beijing snowstorm didn’t help matters in the country’s capital, either, and shortly after 8am, there were few customers in sight at the company’s Sanlitun Village location, while retail workers waiting to greet the non-existent iPhone buyers warmed themselves by singing Christmas carols.

However, the lack of crowds on the morning of the launch shouldn’t be taken as a sign of poor consumer interest in the device. China Unicom, Apple’s main carrier partner in the country, reported earlier this week that it had received more than 300,000 reservations for the iPhone 5.

The release of the iPhone 4S in China at the start of this year was marred by an altercation that caused the delay of the phone’s release in the country. Apple has since implemented its reservation system for releases in China and Hong Kong, in part to prevent scalpers from buying up all the inventory.

It’s been a happy couple of weeks for Apple fans in China, as sales of the iPad mini began in the country last Friday.

China has become a vital market for Apple, accounting for 15 percent of its revenue last fiscal year, behind only the US. In addition to China, Apple is also bringing the iPhone to 50 new markets this month. It launched the device in Korea last week.

Other releases on Friday include:

The device will reach the following markets on December 21:

Apple’s international rollout for the iPhone 5 has been its most aggressive yet, reaching more than 100 countries in roughly three months.