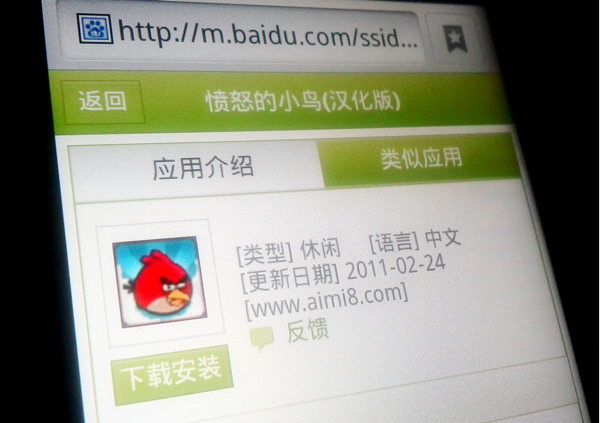 According to the report, the search company is not hosting the apps on its own servers; instead, it utilizes its powerful search engine to display an aggregated list of apps from different third-party app stores in China. It is aligned with Baidu’s “Box Computing” service, which shows relevant information, in addition to existing web links, on mobile search results pages to eliminate the need for using apps.

The catalogue of apps is pretty extensive as it includes popular titles such as Angry Birds and Fruit Ninja, while at the same time has local Chinese apps including ones from rivals Tencent and Sina. Users can download apps with a single click, just like how it would normally work when using the Android Market app. It is unclear, however, whether or not Baidu filters and verifies the apps on its online store.

China is a challenging market for Android due to the enforced regulations, not to mention the lack of Android Marketplace on all legally sold Android phones.

This somehow supports the rumor earlier of an Android-based mobile OS — a search-focused, Google Chrome-like, light operating system for mobile devices — that is expected to be released by year end

Read next: China Telecom to launch iPhone before year's end