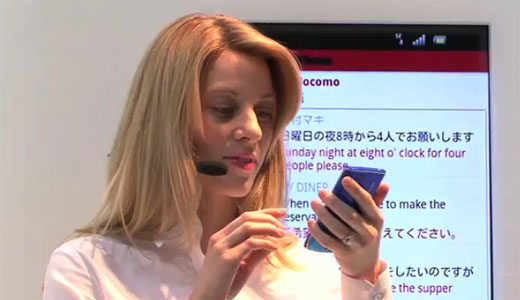 While people around the world have been struggling to learn foreign languages, Japanese operator NTT Docomo just demonstrated a cloud-based automatic interpretation service that interprets voice in real-time.

During the demo, the Docomo staff read a newspaper article in Japanese, which is then interpreted to English in real-time, which is to a receiving device. It was made possible by integrating of a range of the best existing technologies from around the world — such as voice recognition, machine translation, and voice synthesis.

Voice recognition and translation accuracy is still not 100% but the level of inaccuracy is pretty much acceptable. Docomo plans to recruit people to monitor the service and offer it on a trial basis within the year.

Read next: Zapak.com enters social gaming in India with its first Facebook game