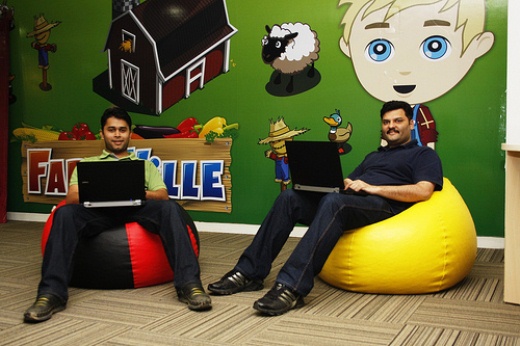 Social gaming company Zynga, the company best known for games such as Mafia Wars and Farmville, is starting a game development studio in India and plans to double its staff there this year.

Times of India reports that the new Zynga Studio-I in Bangalore will be the firm’s largest office outside the United States. With more than 1,500 employees around the world, the company plans to hire 100 workers this year, adding to the 100 who worked in its India office last year. About half the new employees would be game developers, the people who do the actual “coding” of the games, said Colleen McCreary, the company’s human resources chief.

Shan Kadavil, Zynga’s India manager, adds “With the launch of Studio-I, we are expanding our capabilities to leverage the amount of creative talent based in India for new features within Zynga’s popular games.”

Zynga’s games have become popular on Facebook and other platforms, and is currently making waves in the mobile industry as well. According to Social Bakers, India is the 6th largest country on Facebook with 22 million users. Almost 30% of the Internet population in the country are on Facebook with almost 50% from the age bracket of 18-24. The country is also touted as the world’s fastest growing Wireless market, with 752 Million mobile phone subscribers as of February, 2011.

To capitalize on this, Zynga is also looking to offer customers a variety of new payment options that include game cards, internet banking and SMS payments, which will be rolled out in the country within the first half of the year.

It will be a huge year for gaming in India, with Zynga leading the way.

Read next: Sina may be closing in on Weibo IPO