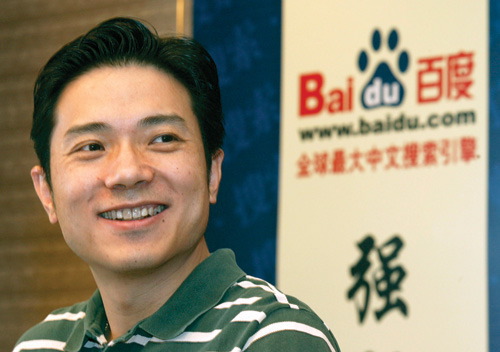 Robin Li, founder and CEO of China’s largest search engine Baidu, said today at the Web 2 Summit, “Well, five years ago when Google decided to set up its China operation, I was asked, if you were Eric [Schmidt] what would you do? I would spend about 6 months in China [first], but Eric didn’t do that, and now he [Schmidt] has given me a gift,” by taking Google out of China.

Li said that he doesn’t worry about his company’s market cap too much, and that 99% of China’s users use Baidu (take that as you will).

Asked why did Google leave China, “That’s a common misconception about China’s Internet market. People think that Baidu is the only game in town, but the reality is that there are many more options for search…there is Tencent, Sina, Sohu, Netease. Many, many Chinese companies are doing search,” meaning that when Google left, it didn’t just leave Baidu necessarily alone in the market.

“China is a very different market. It’s a large and growing market, if you’re not in that market, it’s very difficult to keep up with what’s going on. There were a lot of Silicon Valley VC [venture capitalists] that were in China before Google,” said Li.

On advice on starting up a company in China, Li said, “don’t worry about the things you can’t control.” Asked about censorship in China, Li said, “It was a frustration when I started to encounter this problem about a year after I started the company, and my first reaction was to move to Hong Kong… If I had decided to move to Hong Kong, I’m a Chinese I would been seen as anti-government.”

As far as mobile goes, Li said that the lack of 3G users in China right now is an issue and that there is really no way to know what users will do in China in the future with good wireless Internet access. In response to whether or not Baidu may build its own version of Android, Li said that Baidu has a philosophy of a single “box” interface that starts up instantly, and that a user can use the single box to enter anything and that the box (think a search box basically) is smart enough to know what the person wants to do, including even send status updates, etc.

Finally, Li was asked why he didn’t sell his company for $1-2 billion early on to Google/Microsoft/Yahoo, Li responded that he didn’t think those companies believed that Baidu would get as far as it has, with 30x revenue increase over the last few years.