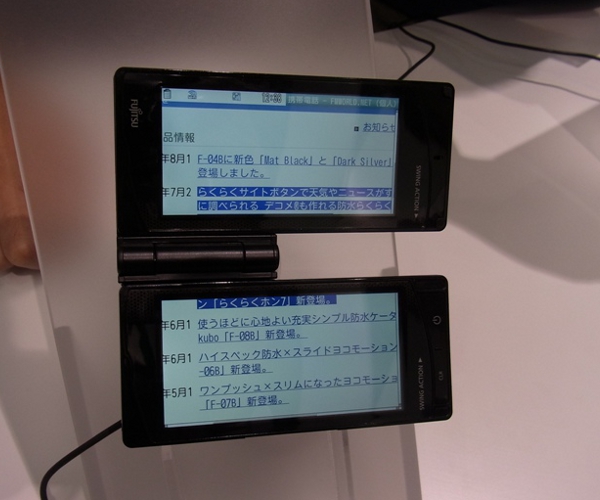 I seems like every like every new product that is demoed at CRETEC in Japan this week is cooler than the last. We’ve reported on bendable OLED screens, augmented reality eyeglasses and WiMax 2 already, but this news is pretty slick as well: a dual touch screen clamshell mobile phone from Fujitsu, that allows you to rotate each of the screens 90 degrees (i.e. to be horizontal) and can run different applications on each screen.

While the prototype that Fujitsu demoed was running Symbian, the phone can also run Android, so that is great news. On the down side, the phone uses about 1.5 more power than a ‘normal mobile phone’ according to Fujitsu (though we aren’t sure what Fujitsu considers ‘normal’), but that’s pretty reasonable considering that it’s using two screens instead of one.

So basically, with this phone, it seems that you can have one or both panels in horizontal mode (at least we think that’s the case) with each panel running a different app. So you could run a Twitter client in one and browse the web in the other. Or expand one app across both screens. Or open up for example a photo on one screen and show the album on the other. According to Tech-On, a Fujitsu rep said:

“For example, by defining the upper panel as ‘social’ and the lower panel as ‘local,’ it becomes possible to visualize data and message being exchanged between the two areas.”

No other specs were released, but we’re going to guess that the phone must have some serious hardware to be able to run two apps on split screens at once. So what do you think of this form factor? Would you get one of these if all the other specs were killer and the price was right?