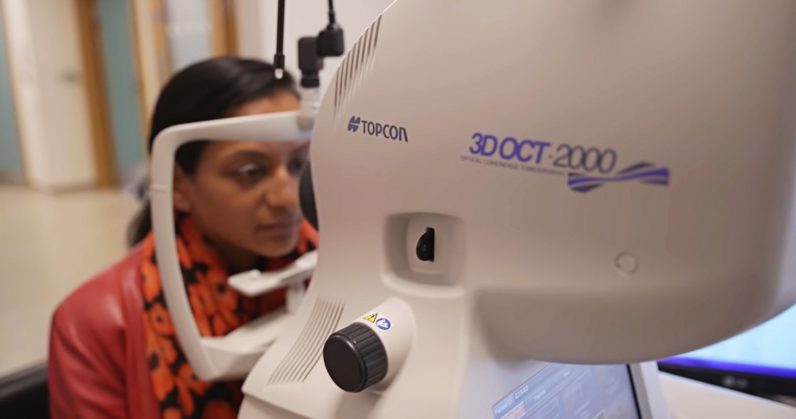 Over the past two years, DeepMind, the AI firm spun off from Google, has been working on a new way to spot eye diseases that could rob people of their sight. The company says it’s now ready to show off its work, as it says its system can detect more than 50 different diseases as accurately as experienced doctors.

DeepMind explained that it’s accomplished this with a combination of two neural networks to analyze optical coherence tomography (OCT) scans, which are 3D images of the eye that doctors typically look at to spot signs of disease, as well as bleeding, fluid deposits, and other issues.

First, the segmentation network analyzes the OCT scan to map the different types of eye tissue, along with any symptoms of eye disease it comes across. Then, the classification network looks at this map to diagnose the patient’s condition and recommend treatment.

The company added that it’s designed its system to give clinicians insight into how the neural networks operate, so they’re not simply interacting with a black box that spits out analysis results. Doctors can look at the maps generated from the OCT scans, and the referral recommendations are expressed as a percentage, so that clinicians get a sense of the system’s confidence in its findings.

The AI could soon be pressed into service to reduce the time taken by doctors to manually analyze OCT scans, and prevent delays in diagnosing time-sensitive issues.

According to the Moorfields Eye Hospital in the UK, some 285 million people worldwide suffer from sort of visual impairment – so that’s a lot of eyeballs that could benefit from DeepMind’s tech.

DeepMind also noted that its tech could work with other kinds of eye scanners, so as to help greater numbers of people with a wider range of eye problems.

The company has just concluded the first phase of its research partnership with Moorfields; if the system passes clinical trials, it’ll be rolled out to the NHS-linked organization’s 30 UK-based hospitals, which serve about 300,000 patients a year in total.

You can read the company’s paper on its new AI system (which is published in the Nature Medicine journal) by grabbing this PDF.

Read next: Maduro’s Petro cryptocurrency will be an official currency in Venezuela – like the Bolivar