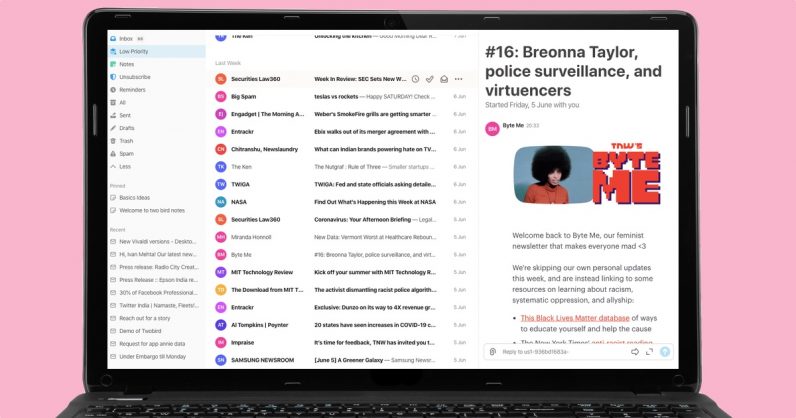 When Google decided to shut its Inbox for Gmail client last year, I was very sad. I liked many Inbox features including day-wise sorting, pinned emails, and automatic sorting into categories such as travel and receipts.

Gmail is slowly bringing some of those features into its main client, but there are still missing bits and pieces. So, I’ve tried to find an email client for Mac that works well for me. Since last year, I’ve tried Boxy for Gmail, which almost mimics its web interface, and Edison Mail, which has nifty features such as a tab for unread emails, and a handy unsubscribe button.

For the last month, I’ve been using Twobird, a collaborative email app from makers of the Notability. I’m happy with its features that offer pinned emails, sorted by day and week, and sharable notes. Here are my thoughts about it:

Twobird is one of the few email clients that’s available cross-platform. You can download a client for Windows, Mac, Android, and iOS.

I’ve been mostly using the Mac client for past month, and it’s features have impressed me. I get a lot of emails every day, which Twobird helpfully sorts by Today, Yesterday, This Week, Last Week, Current Month, and months before that. This way, even if I missed a few emails from yesterday, I can quickly read them today and inch closer towards inbox-zero.

Then there are little things that helped me manage my inbox: pinned emails and notes, snooze, and the recently opened emails tab.

Twobird developers have made the notes features with collaboration in mind. You can create a note and share it with anyone to make edits. Thankfully, they don’t have to make a Twobird account to use it. So even if someone in your team doesn’t use the client, you can still work on a collaborative note.

Personally, I used notes like mini project folders. For a story where I’m talking to multiple people, I can take notes and link email conversations for quick reference. I have a note with upcoming embargoes and events for the week. And I have another note with timeless story ideas I can write on a slow news day.

The biggest complaint I have about Twobird it’s an algorithm for automatically sorting some emails into a “low-priority” inbox. I understand why some emails such as newsletter might end up there, but some important press releases and emails from my colleagues ended up there before I bumped up the priority.

The developers of the app need to dial down the “aggression” of the low-priority inbox and let users decide what should go there.

Edison Mail had a special tab for unread emails, and that made it very easy to quickly go through everything and reply to any email that was important.

I can do the same with “label: unread” search with Twobird, but reading and acting on every email through search is a bit cumbersome. Just give me a toggle or tab.

Edison also had a two-pane view, so I can read any email without transitioning to a new window. Technically, it’s possible in Twobird by holding the command key and clicking on an email, but it would be nice to have that as the default behavior.

A small but minor inconvenience is attachment and RSVP boxes, they’re barely visible at the first glance. So you might miss a calendar invite amid other emails.

Another limitation of the client is that it only supports Gmail-based addresses at the moment. The company says support other email protocols will be available soon.

Twobird words for me perfectly as a work email. I wouldn’t just use it for my personal emails yet, as unlike Gmail and Edison mail, it doesn’t provide default AI-based sorting of emails into categories in categories such as Travel and Finances. Hopefully, that’s something the developer team can work on soon.

Makers of the app aim to keep the app free for individual users. However, they’re planning to build a version for teams for better collaboration and premium features.