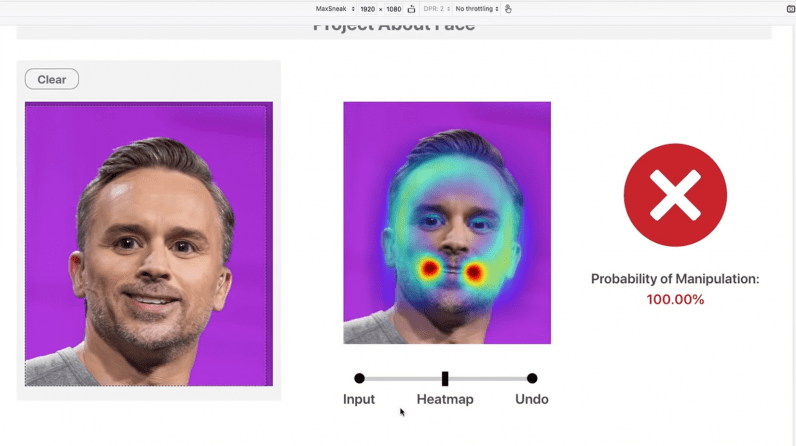 Every year, Adobe lets its engineers have some fun with experimental projects to be demoed at the company’s Max conference. Called ‘Sneaks,’ the experiments often become integrated into Adobe products down the line. Perhaps the most interesting Sneak this time around was a feature called ‘About Face,’ which can detect when a face has been manipulated.

Modern image editing tools make it incredibly easy to modify an image of a person, sometimes to make them seem more attractive, others to ridicule them. For better or worse, Adobe has been a major player in this era questionably real images. About Face seeks to remedy that.

Simply plug an image into the tool, and About Face is able to estimate the chances the image was manipulated. The tool doesn’t look at the image as a whole like a face detection algorithm, but rather at the individual pixels. Because of this can also tell you which parts of the image it thinks were manipulated, providing a virtual heatmap of the altered regions. It seems designed to specifically capture changes made by Photoshop‘s liquify tool; you can see where pixels have been stretched, squished, and interpolated.

Moreover, the tool can even attempt to undo the changes – providing an impressive result in Adobe’s onstage demo. Considering increasing concerns over fake news and deepfakes, it doesn’t seem a stretch to think tools like About Face could one day become commonplace.

You can check out the full clip from the presentation below, and for more Sneaks, head over to Adobe’s blog post here.