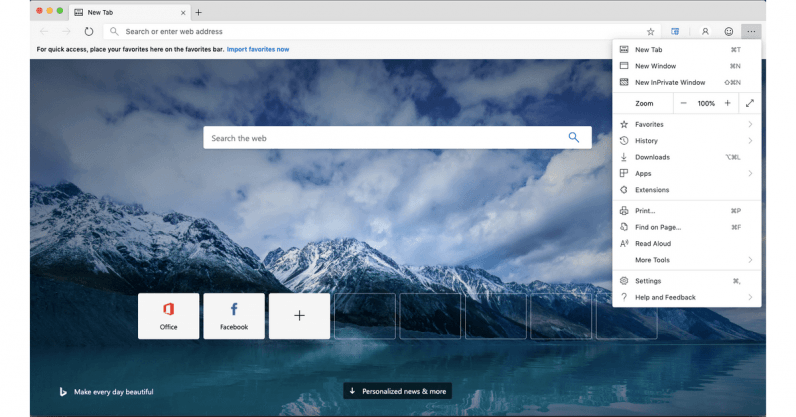 Microsoft has officially announced a preview of its Microsoft Edge browser for macOS.

The Seattle-based tech giant originally unveiled plans for the browser at its annual BUILD developers conference held on May 6. The browser is based on Google’s open-source Chromium rendering engine, which also powers other popular browsers like Chrome, Brave, Opera, and Vivaldi, among others.

The interface will be a lot familiar if you already use Google Chrome. It means you can install Chrome extensions on Edge to augment your browser’s capabilities. Microsoft has also added privacy features that allow you to choose between varying levels of tracking protection.

Then there is the new Collections feature that makes it easy for you to drag and drop images, text, and videos into apps like Excel and Word. However, this feature has not been made available in the preview version.

Gather, share, and organize content more efficiently with Collections in @MicrosoftEdge. What do you think of Collections? #MSBuild https://t.co/jWrfqjPKJ6

Edge succeeded Internet Explorer as the default web browser on Windows operating systems as early as 2015. Two years later, it released mobile versions of Edge for Android and iOS. A leaked version of the Canary builds for macOS made its way a day after the BUILD conference, but the official preview wasn’t available until now.

It is Microsoft’s first web browser for macOS since Internet Explorer for Mac received its last feature update over 16 years ago in July 2003.

Following a five-year agreement between Apple and Microsoft in 1997, Internet Explorer was also the default browser on the Classic Mac OS and Mac OS X from 1998 until it was replaced by Apple’s own Safari browser in 2003.

Microsoft has said it will continue to perfect the look and feel of the browser in future releases. It is also urging users to share their feedback using the “Send feedback” smiley.

You can head to Microsoft Edge Insider website to install the browser, and give it a spin.