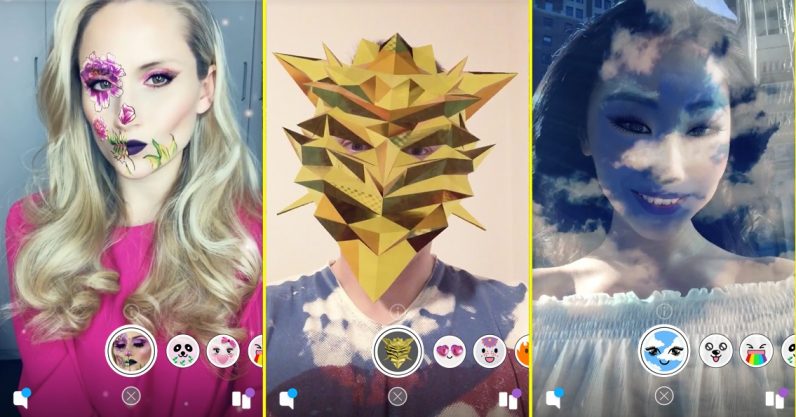 A few months after Snapchat opened its Lens Studio, allowing anyone to make their own versions of the app’s augmented reality filters — the company today announced it’s now allowing its users to make their own face Lenses, a.k.a. the ones Snapchat is famous for.

When the Studio first opened last year, its creators were given multiple tools for creating Lenses that worked in the world, which many of them used to great effect. Nevertheless, while several have been very inventive and amusing, none of them have quite risen to the level of ubiquity that Snapchat’s face filters enjoy.

The templates include AR baseball caps, face paint, and distortions. You can script templates to trigger when you make certain facial expressions, such as raising your eyebrows or sticking out your tongue. If you really want to get crazy, you can stick 2D and 3D objects — such as bunny ears or AR makeup — to the Snapchatter’s face.

The company announced a few months ago that it was rolling out a creator which would let users build their own geofiltered Lenses. But these were all event-specific, and users could only select from a predetermined number of effects and objects. Now users anywhere can make and upload a greater variety of Lenses.

In addition to the above, Snapchat also announced it would be promoting user-created Lenses by creating a public Story specifically for them. If you see a Lens you like in the Discover tab, you’ll be able to unlock it for yourself by swiping up.

There have been hundreds of great user Lenses already — according to Snapchat, 30,000 Lenses were submitted for approval in two months, and they were viewed over 1 billion times. Giving anyone the ability to create face filters will mean even better options. Face-distorting Lenses have been Snapchat’s most recognizable feature since its inception, and it’ll be interesting to see how the community evolves the idea beyond its roots.

If you want to see what the templates look like in action, a few face Lenses are already available on Snapchat’s information page — my favorite is the sugar skull facepaint.