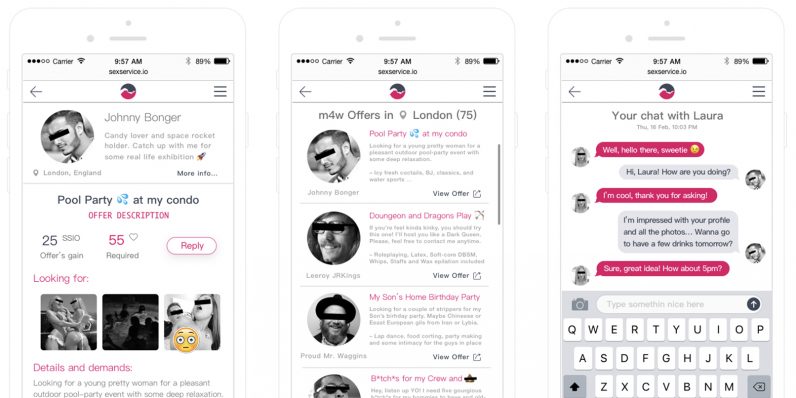 For all of mankind’s greatest achievements, each owes at least a modicum of credit to the one thing they have in common: sex. It could be the desire to have sex. Perhaps it’s an attempt to appear more attractive to the opposite (or same) sex. Or maybe it’s the perfect storm of hormones leading two teenagers to create a child, destined for greatness, by bumping genitals in the back of a Toyota Tercel outside an In-N-Out Burger.

Knowing what we know about sex and innovation, pairing sex with the blockchain seems a natural progression. And that’s exactly what the worst-named application of 2017 intends to do.

SexService.io — in case you couldn’t take the hint from men and women listing a price next to scantily-clad photos — is an escort platform that protects both prostitutes and their clientele by facilitating hookups via blockchain technology. It’s anonymous; the service uses no emails or user credentials, and no one has access to private data as it’s encrypted and stored on the blockchain.

It’s also touted as a safer, more secure alternative to traditional means of, um, picking up sex workers. All interactions are secure, and the decentralized platform uses a two-step digital payment to process these transactions — think of it as Coinbase for your junk.

Kidding aside, all studies point to safer prostitution being a better alternative to prohibition. Lust is big business, and conservative estimates peg the global spend at $186 billion. That’s a lot of revenue for impoverished countries, like India, home of an estimated three million prostitutes raking in a combined $8.4 billion annually.

It’s hard not to poke fun, but sexService.io could be a step in the right direction. By decentralizing payments and user data, the app fills two of the sex industry’s biggest holes: payments and discretion. It’s not going to fix everything wrong with the sex industry, but it’s a start.

No matter how it goes down, sex is a driver of innovation. That statement is as true now as it was in the 1500s when Leonadro da Vinci painted a portrait of Lisa Gheradini, now known as the Mona Lisa — presumably to get all up in ‘dem delicates.

This article regrettably had the word ‘hookers’ in the title of a previous version. We do not condemn sex work in any way and ask for forgiveness of those we offended.