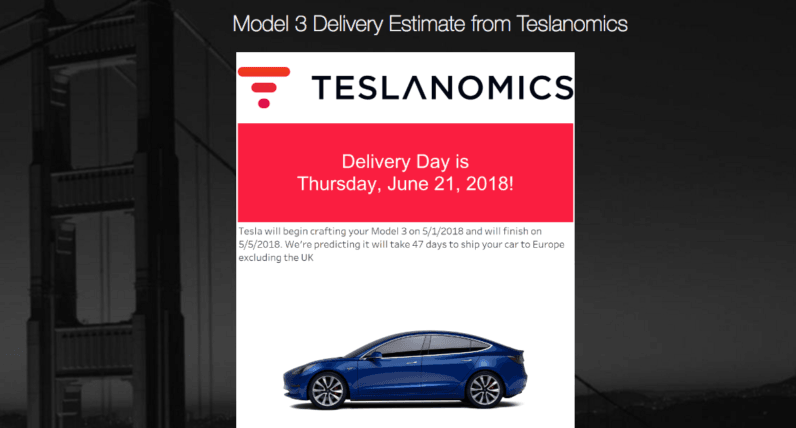 Yesterday Elon Musk delighted thousands of Tesla enthusiasts when the charismatic CEO confirmed the automaker is gearing up to start production of the upcoming Model 3 this week. But despite the good news, one question remains: When can you expect the new Model 3 delivered to you?

This is where the Model 3 Delivery Estimator comes in. Developed by data scientist and Tesla aficionado Ben Sullins, the handy tool calculates approximately how long you’ll have to wait to receive your already pre-ordered Model 3.

To assert the potential delivery date, the estimator factors in details such as date of reservation, exact Model 3 variation you ordered, preferred delivery location as well as your Tesla vehicle ownership history.

For example, California-based enthusiasts that already own a Tesla vehicle, but were quick to pre-order the upcoming Model 3 75, can expect their new vehicle to arrive by October 15 this year – that is if they were one of the first 400,000 to have placed reservations.

The reason for this is that Tesla plans to give delivery priority to California residents, as Musk has previously commented.

On the other hand, European citizens who would be buying their first Tesla vehicle might have to wait all the way to 2019 for certain models – like the 75 or the 75D.

So if you fit the profile, be prepared to receive your shiny new Model 3 much later than you were probably hoping for.

In case you’re wondering how the estimator comes up with predictions, you can watch this YouTube video Sullins made to explain how the algorithm works.

Read next: Argentina: A look into Latin America’s most global tech hub