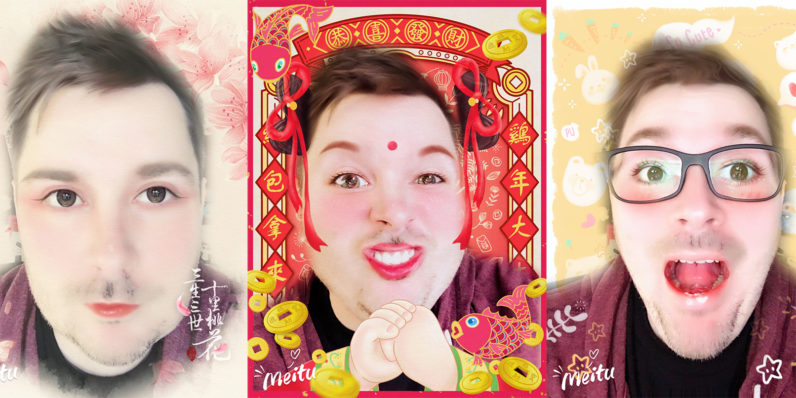 Dream big, kids; even apps like Meitu can make you billions.

Meitu, a popular Chinese photo-editing app, is the flavor of the week in the United States. The app allows users to snap a selfie and add a (very Asian) filter, Bitmoji-style stickers, or worse: arrange several photos in a collage. Pastel backgrounds, airbrushed skin, and huge, anime-esque eyes are everywhere these days and you really can’t go far without running into one. If Myspace were still a thing, I’m convinced that this level of awful could only reside there, lost in a sea of glittery gifs and auto-playing music.

I feel dead inside just thinking about it.

While testing it I got curious about what happens when you continually add filters to already filtered (and saved) images. It changed my life.

This simple exercise made me realize that a once normal(ish) face lost context each time you added frills to beautify it. In the end, there was nothing left.

There’s a certain somber symbolism somewhere in there. It turned out to be exactly what our Editor-in-Chief Alejandro said: “a cruel metaphor for the times where we apply crap to crap continuously in a vicious cycle.”

I then drank green tea and danced naked in a garden with butterflies for the next 12 hours while I pondered the profound impact of one of America’s favorite new apps. After that I went back to work and did some digging on Meitu.

I learned “overnight success” is relative; Meitu has been around for the better part of a decade.The app first debuted in China in 2008 and became such a popular way to spend time that it IPOed shortly after with a $4.6 billion valuation. Since, the company has sort of plodded along on the Hong Kong exchange with consistent if unspectacular growth.

And then someone in the US found it.

Now we’re all going to have to suffer through Bitstrips-level rage while we evaluate which ‘friends’ we can hide from our Facebook timeline.

Update 01/20: Turns out, there’s more to be learned. Apparently Meitu syphons off a lot more data than any user could possibly expect or want from a beautifying app. Nothing is ever free.

Let me get this straight…
All of you just installed a photo app from China that requires these permissions? Let me know how it works out. pic.twitter.com/wGDUYbRdSA