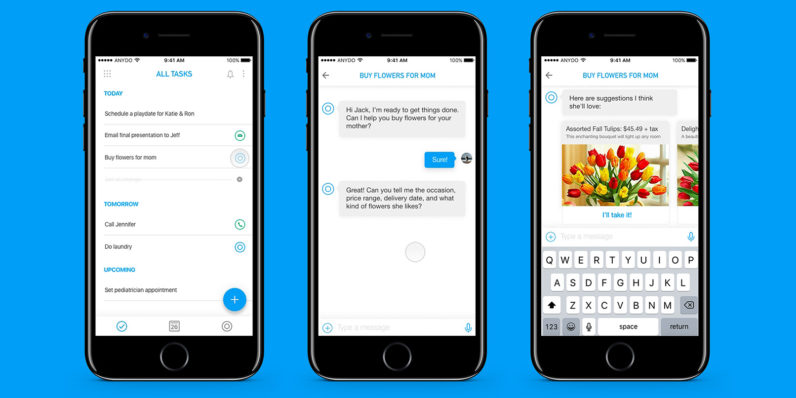 Any.do is updating its to-do app with a bunch of powerful new features, the most notable of which is an AI assistant that can actually help you complete the tasks on your list.

After you’ve added a task that needs doing, such as buying your mum a birthday present, you can tap on it to get help via a chatbot-style interface. The company says its tool can also help with things like booking housekeeping and laundry services, ordering groceries, booking flights and even canceling your mobile carrier plan. Any.do will tack on a fee that varies between 5 and 15 percent of the cost of the service or product you need to complete your task.

It’s worth noting that you may be prompted to interact with an human assistant in case your task is particularly complex or can’t be handled by a bot alone. While the company is building out its own system to tackle tasks, it’s also inviting third-parties to integrate their services with the app.

Thanks to the company’s partnership with Amazon that was inked last month, Version 4.0 will let you create tasks – including those that a bot can take of for you – by issuing a voice command to your Echo or Dot. The latest version will also integrate a calendar so you can see tasks and events across your day, week and month. The app will also get faster cross-device syncing.

The update will first become available as a limited beta for iOS users, and will subsequently arrive on Android. If you’re in the US, keep an eye out for a notification within the iOS app.

With that, Any.do is setting itself apart from rival to-do apps by being the only one to actually get involved in helping you get stuff done. That also gives the company an additional revenue stream, over and above its paid plans for individuals and business users.

It’ll be interesting to see if that helps Any.do, which currently claims a user base of 15 million across the globe, beat out competitors like Microsoft’s Wunderlist, and Todoist. It’s not going to be easy, but at least the company is thinking far beyond interface tweaks and minor features. Founder and CEO Omer Perchik told TNW that the company plans to eventually make its assistant available worldwide, and support a wider range of tasks over time.

Read next: This chatbot makes applying for a US visa easier than ever