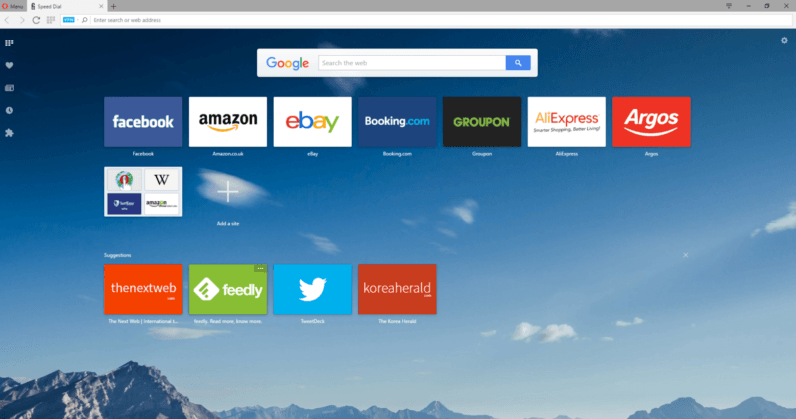 Update: Well, that was shortlived. Less than three hours after this review was published, Netflix has blocked the VPN from accessing its library. That doesn’t mean that the virtual private network is completely useless, though. It can still be used to access a handful of other great services that aren’t readily available in Europe, including Hulu and Pandora. Playback is just as smooth, and Casting works a treat.

I’ve been a fan of Opera ever since I stumbled upon the Opera Mini application when I had my iPhone 3G back in 2008. Since then, I’ve always tried my hardest to keep up to date with the company’s latest projects in spite of Chrome being more popular, so when I heard this morning that Opera 40 was out, I jumped out of bed, woke up my computer and installed the build.

The first thing I tried out was, of course, the built-in VPN.

It’s completely free to use and is powered by Opera’s subsidiary SurfEasy, which it acquired back in 2015. Users are given the facility to connect to five different server locations: Canada, Germany, the Netherlands, Singapore and the US, or they can choose to let the browser select the most optimal server.

Opera claims that the VPN should be fast and reliable enough to stream video in 720p HD. However, a latency-free connection will primarily depend on a user’s download speed and how close they are to their server of choice — so if you reside in Australia, have a slow Internet connection and are trying to watch a film using an American server, don’t expect the best response.

I’m based in the London and pay for a download speed of around 50 Mbps, which is more than enough to stream a 4K movie on Netflix while simultaneously scrolling through Facebook. Seeing as London is around 11,100 km away from New York,  I decided to see how much speed would be lost if I connected to a US-based server.

As you can see, the results are actually pretty astonishing. My download speed only dropped by approximately 2 Mbps when I connected to a server thousands of kilometers away. Unfortunately, the overly-high ping doesn’t bode well for streaming content, though, as the increased response time means that it takes longer to buffer. That said, I was still able to stream a 720p HD TV show with minimal interference.

If you’re based in a country that doesn’t have access to the American catalog of content on Netflix, you’re going to love Opera 40’s compatibility for Chromecast. Using the VPN, you can play any film or TV show on the big screen. All you have to do is manually connect to a US server, select the title you want to watch, then hit the Cast button.

Due to the high ping rate I previously mentioned, it did take me a little while to establish a connection when streaming a show through a server located stateside. Once I was connected, playback was silky smooth. The video was so fluid that if someone walked into the room, they would have instantly assumed that I was watching something I’d recorded from live TV using my Sky+ HD box.

I’m pleased to report that the RSS reader included in Opera 40 is pretty solid, too. It’s reliable and refreshes feeds promptly. Adding sources is also very easy as it pulls suggestions based on your web history. However, I’d like to see a future update bring a keyword search feature, as well as the ability to import feeds in bulk from an XML file.

My only qualm with Opera 40 is that it sports an adblocker. As you’d expect, you are given the choice between using it or not, but I strongly believe that it shouldn’t be there at all. Adverts have a purpose: To provide creators with a platform to earn revenue to enable them to continue creating. Automatically blocking these ads prevents them from earning a living.

All in all, I think Opera 40 is a great little browser that could possibly pry me away from Chrome. Only time will tell.