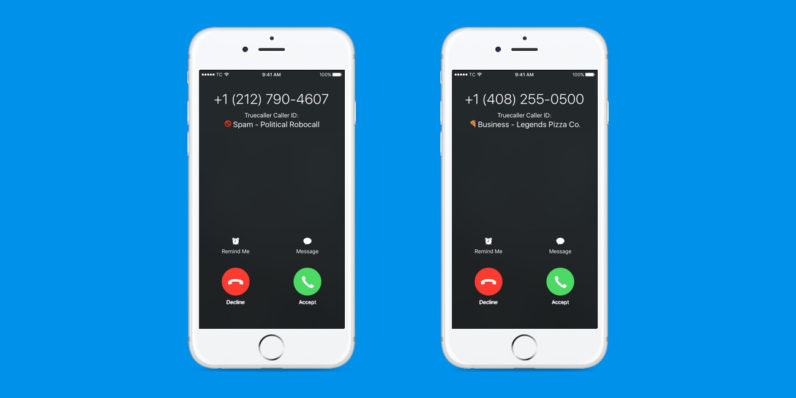 Following the launch of the new iPhone 7 and the announcement of a formal shipping date of September 13 for iOS 10, Truecaller has announced that its app will now identify and display whether an incoming call on your iPhone has been marked as spam – allowing you to choose to avoid it before picking up.

This caller ID feature has been available on Android for years; it’s only now that Apple has introduced CallKit integration in iOS 10 to allow developers to parse call information in their apps. At its WWDC developer conference earlier this year, Apple detailed a caller ID extension that developers could harness to identify spam calls, and it looks like this is what Truecaller has been able to implement at long last for iOS.

Truecaller has a massive user base that flags spam callers; this information is shared with everyone using the app. People can also tag a number with a name, such as an insurance provider or a pizza joint, to help identify it for future call recipients.

It also pulls contact information from social networks when people link the app to their online profiles, making for more detailed info about incoming calls. Of course, it will ask you permission before doing any of this and you can also delist yourself at any time.

Yeah, it can be a bit much and you probably don’t want Truecaller identifying you to everyone you call this way, but the system does help combat spam calls effectively. The company notes that mobile users in India alone receive about 300 million spam calls a month, so there’s a clearly a need for a solution like this.

However, it’s worth noting that as with any app, Truecaller is prone to bugs that can expose user data; it recently encountered such an incident in March and subsequently fixed it. If you’re concerned about privacy, you’ll want to think long and hard before installing the app.

The iOS version of Truecaller also brings a “My Block List” feature which lets you control who can and cannot contact you. Add people to the list and their calls will automatically be blocked.

These new features will be available in a future update, and you’ll need iOS 10 installed on your phone to use it.

Read next: The iPad Pro now costs less than an iPhone 6s Plus