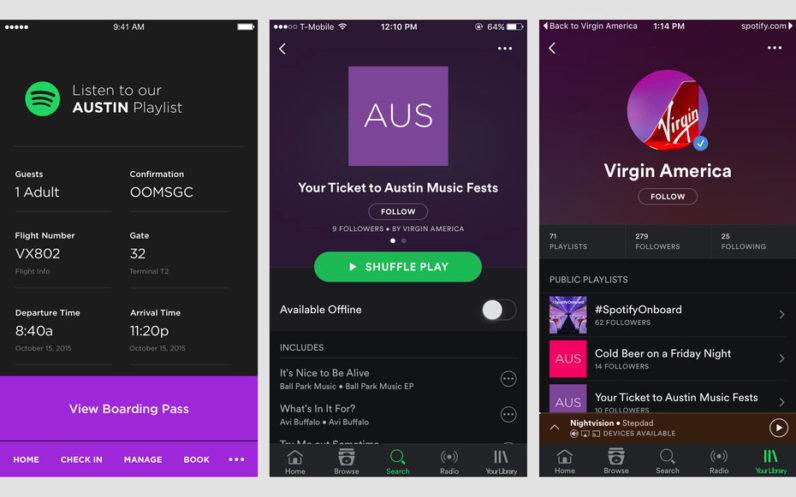 For anyone who’s ever flown on Virgin America, you’ll come to recognize that the airline is a bit quirkier than most of its competitors. It’s got purple mood lighting on board, DIY food and drink orders straight from the screen in front of you, of course, that annoyingly catchy safety video.

Today, the company unveiled details of its first mobile app to help travelers book flights in 60 seconds or less. In your profile, you can select preferences such as aisle or window seat and cabin class to expedite the booking process. Your e-ticket information can all be stored within the app to get you right past the check-in line.

Once you’re off on your flight, Virgin America has also partnered up with Spotify to offer playlists that match your destinations. For example, New York City has themed-playlists like Empire State of Mind and A Night On Broadway, while Las Vegas’s got Big Ballin’ Casino Royale Mix (Hip-Hop Dolla’ Bills Mix) and Vegas Baby (Rat Pack Mix).

It’s similar to what TripAdvisor and Google Play Music launched earlier this summer with its own city-themed playlists. On board Virgin America, however, you can stream these Spotify playlists for free provided you have a Spotify account (you are given the option to sign up for one if you don’t.)

Read next: Hatchli is like Product Hunt for ideas, and it could be the next big thing