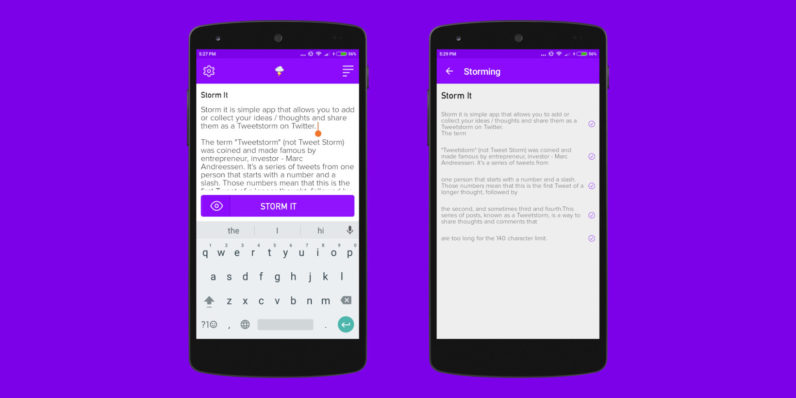 There have previously been rumors about Twitter allowing tweets longer than 140 characters; some even speculated that it would allow up to 10,000 characters.

That’d be great for those of you who enjoy publishing tweetstorms, or a bunch of tweets in quick succession. We’ve seen them from Donald Trump, Hillary Clinton and famed VC Marc Andreessen. There are tools on the Web to let you create your own easily – but if you’re on the go and have a lot to say, you’ll want to use Storm It.

This free Android app lets you bang out your thoughts, breaks them up into separate tweets and publishes them for you. It’ll even add a tweet count and avoid breaking up words in your text, so your tweets are easy to read and follow.

So difficult to find quality games on Google Play. Right now, many games are listed as free but rely heavily on in-app purchases to 1/5

Storm It works like a charm. I used it to post a rant about Android games on Google Play, and had no problems publishing a neat little tweetstorm within seconds.

The app was built by Chennai, India-based developer NFN Labs, which says that it will add more features to Storm It and release an iOS version soon. You can grab the Android app for free right here.

Update: Storm It is now available for iOS too.

Storm it on Google Play