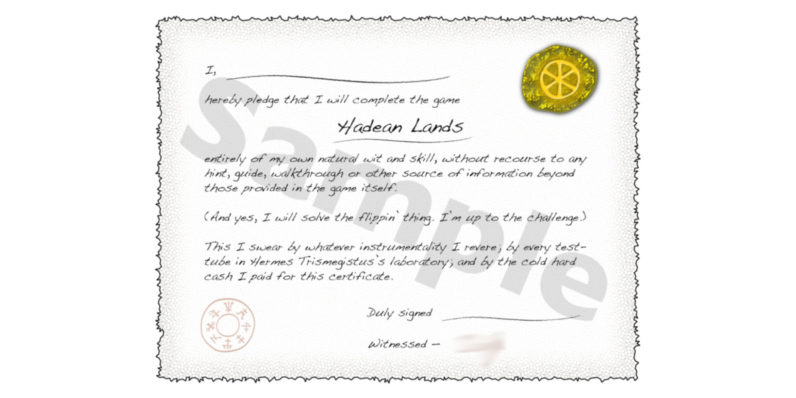 That’s the question Hadean Lands’ downloadable add-on raises. The Windows-based game is a text adventure with no graphics. To play, you have to read about scenarios, and type in commands to explore rooms and solve puzzles. It costs about $13.50.

Its only piece of downloadable content (DLC) will set you back by $35. And unlike DLC for other games, which usually bring mission expansions, new costumes, weapons or vehicles, this one is a single PDF.

The file contains a printable certificate that states that you pledge to finish the game without referring to any hints or walkthroughs.

That’s it. You don’t get any extra puzzles or gameplay modes, just a PDF. Okay, the FAQ on the DLC listing page says there’s also a JPEG version. But really, that’s it.

There’s really no way to justify this – the only thing I can think of is that it’s a way of showing your support for the developer. But in that case, why not just buy additional copies of the game and gift it to friends?

This feels way too much like the $999 I Am Rich iOS app that was launched way back in 2008 and literally had zero functionality. There are better ways to spend your money, hard-earned or otherwise.

Read next: Vine's move to 140-second videos is a mistake