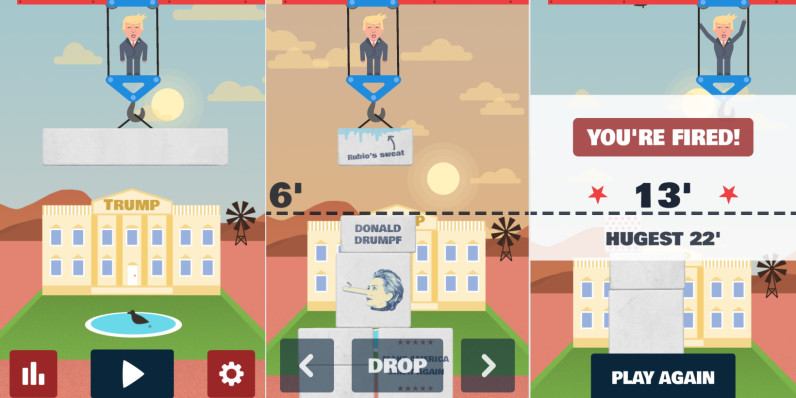 Trump was once entertaining. He was a human cartoon character, a real-life being worthy of mockery for his half-baked ideas on how to “make America great again.” Now, the joke is far less funny and Trump is only a step away from the White House.

If you need help transporting yourself to a simpler time, one where Trump remained a human soundboard for morning radio and fodder for SNL and The Daily Show, ‘Trump’s Wall’ might be the cure to what ails you.

The game is a simple one that features The Donald as a heavy equipment operator attempting to build a wall to keep ducks from crapping on the wall at his house (or is it the White House — it looks similar).

Unlike most “how high can you stack it” games, you’re not just dropping blocks in place, although you could certainly take that strategy if you choose. Instead, you’re trying to mix the blocks so that you can build higher while keeping the entire structure stable. It’s sort of like Tetris, only with the intent to keep out ducks and the inability to rotate your pieces.

Throughout the building process, Trump shouts Trump-isms, and makes subtle jokes about candidates he squared off with in the 2016 election. If you let a block fall to the ground, ‘You’re Fired’ and have to start all over.

If you want to give it a shot, you’d better grab it quick. It’s hard to imagine this game not getting sued into oblivion by a notoriously litigious Trump.

Read next: Uber has billions of reasons for keeping drivers as freelancers