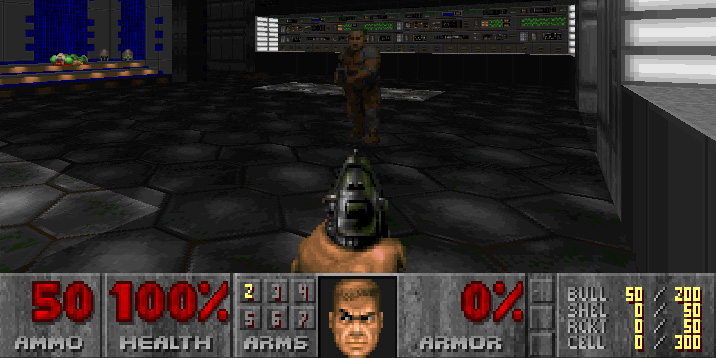 Google made headlines earlier this year when its AlphaGo AI defeated world champion Lee Se-Dol in the ancient board game Go. But a group of researchers want to push the boundaries and see how a computer might fare in a first-person shooter deathmatch.

The 2016 Computational Intelligence and Games (CIG) Conference will host a competition to determine the best bot that’s capable of winning a multiplayer round of Doom, while playing the way a human does.

That means that unlike enemy AI in video games, which have a complete overview of the level’s map, locations of powerups and weapons, the bots will have to rely only on raw visual input that mimics what a human gamer sees when they play a game.

The Visual AI Doom Competition will pit bots against each other in two tracks: the first one will see them playing a map known to their programmers with only rocket launchers and health boosts, while the other will feature an undisclosed map with all weapons and items available. The player to score the highest number of frags will take home the gold.

It’ll be interesting to see if participants can use reinforcement deep learning, as is suggested by the organizers, to program their bots to victory. This technique is the same one used to train AlphaGo.

It brings together deep learning, which teaches patterns going through tons of gameplay data, and reinforcement learning, which grants rewards every time a bot completes an action successfully.

You have until May 31 to submit your bot for a warm-up deathmatch, built using C++, Python, or Java. Final submissions will be accepted until August 15, and the most promising entries will fight to the finish in September at the CIG conference in Santorini, Greece.

The event will also see other competitions featuring AI playing games like StarCraft, Angry Birds and even a text-based adventure.

Read next: Record Bird's chatbot can help you pretend you know about music