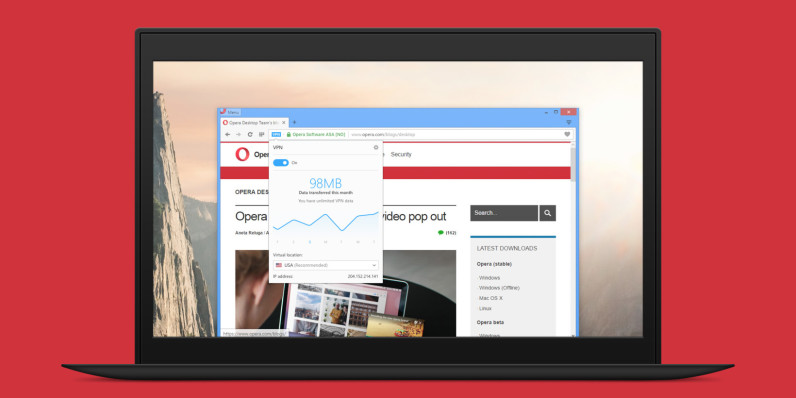 Update [September 20, 2016]: After previewing its built-in VPN in the developer version of its browser in April, Opera has now brought the service to the public version of the app.

Opera 40 also brings improvements like an automatic (and configurable) battery saving mode for laptops, Chromecast support, and RSS support in its newsreader tool.

Opera has updated its desktop browser with a handy feature to keep you safe on the Web: a free built-in VPN service that you can turn on with just a click.

You don’t even need to sign up for an account. Once you’ve turned it on in the Settings menu, you can switch between virtual locations. The developer release that’s available today offers three options: US, Canada and Germany. Opera says it will add more countries in the browser’s stable version.

An icon in the browser’s address bar lets you switch locations on-the-fly,see if your IP is exposed and check how much data you’ve consumed through the VPN service.

Since it’s integrated directly into the browser, there are no third-party extensions to install, no monthly fee and no cap on how much you can use it.

The company says that its VPN offers 256-bit encryption and replaces your IP address with a virtual one to make it difficult to trace your location and identify your computer.

As with other such services, it also helps you access region-locked content like streaming video and social networks. The addition of this feature is the result of the company’s acquisition of VPN provider SurfEasy last year.

In my testing, I found that Opera was able to assign me a different IP and spoof my location, so I could visit the US sites for services like Spotify and Netflix. However, I wasn’t able to stream content as they displayed errors; it appears that the VPN couldn’t get past their geo-blocking systems, so your mileage with it will vary depending on the sites you frequent.

The browser game is now hotting up, as Chrome continues to improve with its 50th release and Vivaldi enters the mainstream with its first stable version that’s packed with features.

You can try Opera’s free VPN in the latest developer build available on this page for Windows and Mac.