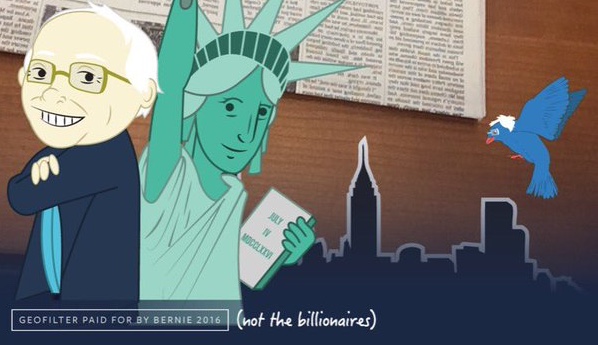 The Democratic Party is a two-person race right now, and Bernie Sanders is trying to win over millennials with a new Snapchat filter.

Bernie’s filter does one simple thing: it puts a cartoon image of Bernie next to the Statue of Liberty with a tagline reading “geofilter paid for by Bernie 2016 (not the billionaires).”

The overlay is only for the greater New York area in celebration (or thirst) of today’s primary. Brooklyn native Sanders is trailing in the polls ever so slightly, so it seems he’s looking to the kids to help push him over the edge (in a state Clinton once represented and still has strong support, no less).

Of course, Hillary one-upped Bernie long ago; her ‘chillin’ in Cedar Rapids’ video spawned a Vine explosion. Bernie had a bird land on his podium once, though, so there’s that.

And the war for dozens of millennial voters rages on.

Read next: Hey AccuWeather, who do you think you are: Punxsutawney Phil?