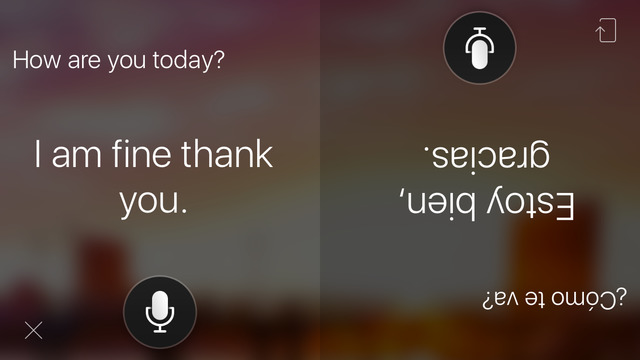 Microsoft has released an update for its Translator app on iOS and Android that gives each version a different new feature.

Android users now have an AI-powered translations engine, which works offline. To get started though, users need to download the additional free language packs first, which are available in French, German, Chinese (simplified), Italian, Russian, Polish, Vietnamese, Spanish and Portuguese.

While it’s not perfect, Microsoft says the offline mode offers “near online quality” right now by using its first Deep Neural Network-powered engine. This is the same technology that Skype uses for its live in-call translations.

It’s a handy feature to have for translating things like menus and signs when you’re traveling. It works with more than 20 languages, including Chinese (simplified and traditional), Czech, Danish, French, German, Korean, Japanese, Dutch, Spanish Russian, Turkish and more.

Microsoft hasn’t made it clear why the features are being rolled out on each platform separately but it has said that all of them will be available on iOS, Android and Windows Phone soon.

Read next: This is what code on GitHub actually looks like