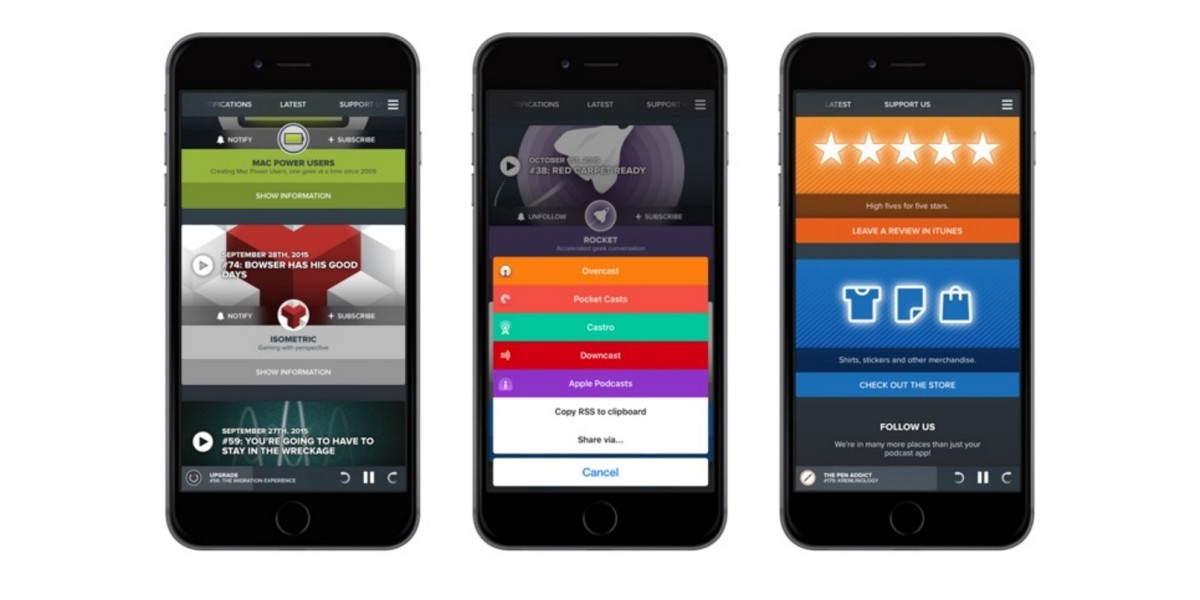 With a whole load of photography and imaging apps, an audio mood journal and updates from big names like OneNote and Snapchat, there’s a whole lot to get through.

Last month, Viber did the unthinkable – it rolled out an update that lets you delete messages you’ve sent from the other person’s phone.

Now, you can probably think of quite a few situations this could come in handy; aside from ignoring those drunken messages you sent, it’s useful for when you need to do things like send someone your banking details, but would rather they didn’t remain lying around.

The update rolled out for Android users too.

If you’re a fan of easyJet’s no frills approach to flying, you’ll be pleased to hear that you can now avoid hours of waiting pointlessly at the airport for a delayed flight, but only if you’re an iOS user. Sorry, Android folks.

Via a partnership with Flight Radar24, you can now see where your plane is up to three hours in advance of your departure.

If you have a whole load of photos gathering dust in a number of different virtual repositories, then Everalbum is probably worth a look.

In a nutshell, it’s a smart cloud storage filter that draws on services like Instagram, Facebook, Dropbox, Google Drive and your Camera Roll to bring your photos into one place.

It does offer a number of other features (a ‘throwback’ feature, flip books) but curation is where Everalbum is strongest.

It’s still not perfect (it relies on date-based filtering, for example) but it’s worth checking out.

If you’ve always dreamt of having your own daily show, but don’t have the sort of budgets required for a professional operation, you do at least have the option of using Headliner, which will get you somewhere close.

When you log in, it lets you record 20 seconds of video to talk about whatever you want from the news of the day. You can then put it in the appropriate category and hope it makes it to the front page’s featured section for more exposure.

In a move of blind faith, the company is relying on users to moderate the content posted (to ensure it’s original and not obscene etc.). So far, the company says the funniest and timeliest videos are the ones that make it to the top.

Looking out of the window is an effort isn’t it? Thankfully, now you don’t need to do anything as antiquated as that to see what the weather is like outside.

Unlike the usual weather app, YoWindow doesn’t think a little static icon of a sun or cloud is enough to convey the true weather outside. So it animates it as the day progresses as the day passes.

There are a lot of journalling apps out there, but there aren’t many that let you express yourself through electronic music. Cove does just that.

The company behind it hopes that people who struggle to express themselves due to anxiety or any other reason might find it easier to bang out a melody instead.

You get four base moods to play around with (playful, longing, calm, struggling) and these are the basis for your creation. Tapping the screen lets you augment it and your taps appear as stones in the water.

Fans of Relay FM have had to wait a long time, but there’s finally a native iOS app for all your listening needs.

You can control playback speed, access show notes or control it via your Apple Watch, if you have one.

OneNote got a major overhaul last month on desktop, Android and iOS.

Among other UI tweaks, if you’ve got a 3D Touch-compatible iPhone, you can also now use a long-press to quickly pull up the option to create a new note, take a photo or see recently opened notes.

Android users got a new floating icon that lets them create a new note from anywhere, but alas iOS users…

Like on other platforms, it allows you to sync your bookmarks, history and tabs across devices. And yes, it includes a private browsing mode too.

The downside of playing in Apple’s ecosystem for Mozilla is the inability to use its own rendering engine, which means there’s little to really separate it from other browsers.

Still, if you’re a fan of Firefox, it’s good news.

If you love Snapchat’s lenses but hate the fact they disappear, you can now keep them for as long as you want, as long as you’re happy to spend 99 cents on them.

Do you need more explanation than that?

If Twitter is a serious game to you, then Klear is an iOS app you’ll want to check out.

What used to be Twtrland on the desktop is now Klear on iOS, and it gives you the sort of performance insights (as well as comparisons over time) you’d expect of a Twitter app.

Now, Nuzzel has moved beyond Twitter’s walled-garden to let you stumble across news items without needing to log in.

The update also let you search for specific feeds and stories now, as well as favoriting things for quick access later.

The updated features are also available for Android users.

If GIFs are your thing, then updating to Tumblr’s latest app should probably be on your list of to-dos.

In a nutshell, it lets you make GIFs in just a few taps and upload them wherever you want to share them.

Of course, Tumblr probably hopes you’ll share them on its platform, but we won’t tell if you don’t.

It’s not exactly the only app to offer the option –  Giphy’s Lively camera offers a similar experience but if you’re already a Tumblr user, this will be welcomed.

The ‘perfect’ photography app might not exist. Face it.

What you can get, however, is the perfect one for the situation you need.

Phhhoto wants to be that for live events, and largely bases its appeal around allowing you to share pictures of/at an event without having to pepper them with ugly hashtags.

That could be a concert somewhere, or it could just be a bunch of friends sharing a particularly photogenic pizza.

Team collaboration and commenting platforms are hardly a rarity, but ones that let you leave inline comments on images and video files aren’t as easy to come across.

So, if Google Docs-style threaded commenting is what you want, then Spaces from the company formerly known as YouSendIt is well worth checking out.

Clicking on a shared video file lets you pause it at a specific point and leave a comment relating to it, which is particularly useful for anyone who needs to produce, or provide feedback on, video content.

You get two ‘Spaces’ for free, but will need to shell out $15 per month if you want the unlimited option.

There is a version for Android users too, but it was a little buggier than the iOS build when we tested it.

Despite being teased in one form and another for quite a while, it was only last month that iOS and Android users could start streaming the service with native mobile apps.

As you might expect, it taps into the huge music catalog on YouTube to bring you all the tracks you know and love – it even lets you continue playback with the screen turned off.

Unfortunately, for most of the best features (including offline playback), you’ll need to cough up $9.99 per month for YouTube Red.

Facebook is good at a lot of things, but it’s not good at breaking news. At least, it’s not as good as Twitter is, but it’s trying to change this with the launch of Notify.

The idea is to allow users to access this news-based info on Facebook as it happens, rather than after the fact in people’s News Feeds.

The bad news, for anyone outside the US or without an iOS device, is that you can’t use it.

Tinder got a major update last month to let you display your education information on your profile, as well as ushering in an updated algorithm that promises better matches.

As well as suggesting fewer dud matches by drawing on more data points, the dating service also made it easier to send messages to people.

It’s still not guaranteeing any true love though.

The update rolled out across both iOS and Android.

You’re desperate to check out the latest Microsoft services despite being a loyal iOS user, right?

Well, if that sounds like you, Cortana is now available for you to check out. Sort of.

You will still need to sign up (and be accepted) on the public beta program, and there’s less deep integration on iOS than you’d find on a Windows device, obviously.

Still, Cortana’s a pretty smart virtual assistant, so her arrival on iOS will be welcomed by some. It’s also available for Android users, and offers slightly better integration there.

The iPad might have the lion’s share of music production tools; Korg Module is the exception to that rule.

That price will put a lot of people off, but if you’re serious about your synths, you’ll probably hand over the cash.

Unroll.me’s desktop service has been clearing up inboxes for a while already, but November saw the introduction of the company’s first native iOS app.

Using a Tinder-like approach – ie. swiping – you can now rid your inbox of unwanted subscription newsletters, or roll them all up into a single easily-consumable (or ignorable) digest.

Of course, you can also specify to keep the truly useful newsletters as well, and not include them in a bundle at all.

Read next: Facebook Messenger for Business: now you can chat with businesses via Messenger directly on their website